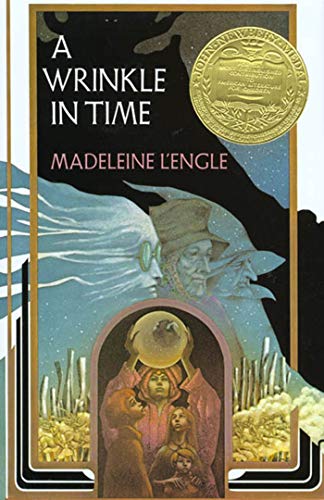 It was a dark and stormy night; Meg Murry, her small brother Charles Wallace, and her mother had come down to the kitchen for a midnight snack when they were upset by the arrival of a most disturbing stranger.

"Wild nights are my glory," the unearthly stranger told them. "I just got caught in a downdraft and blown off course. Let me sit down for a moment, and then I'll be on my way. Speaking of ways, by the way, there is such a thing as a tesseract."

A tesseract (in case the reader doesn't know) is a wrinkle in time. To tell more would rob the reader of the enjoyment of Miss L'Engle's unusual book. A Wrinkle in Time, winner of the Newbery Medal in 1963, is the story of the adventures in space and time of Meg, Charles Wallace, and Calvin O'Keefe (athlete, student, and one of the most popular boys in high school). They are in search of Meg's father, a scientist who disappeared while engaged in secret work for the government on the tesseract problem.

A Wrinkle in Time is the winner of the 1963 Newbery Medal. It is the first book in The Time Quintet, which consists of A Wrinkle in Time, A Wind in the Door, A Swiftly Tilting Planet, Many Waters, and An Acceptable Time.

A Wrinkle in Time is soon to be a movie from Disney, directed by Ava DuVernay, starring Storm Reid, Oprah Winfrey, Reese Witherspoon and Mindy Kaling.

This title has Common Core connections.

Everyone in town thinks Meg is volatile and dull-witted and that her younger brother Charles Wallace is dumb. People are also saying that their father has run off and left their brilliant scientist mother. Spurred on by these rumors, Meg and Charles Wallace, along with their new friend Calvin, embark on a perilous quest through space to find their father. In doing so they must travel behind the shadow of an evil power that is darkening the cosmos, one planet at a time.

Young people who have trouble finding their place in the world will connect with the "misfit" characters in this provocative story. This is no superhero tale, nor is it science fiction, although it shares elements of both. The travelers must rely on their individual and collective strengths, delving deep into their characters to find answers.

A classic since 1962, Madeleine L'Engle's A Wrinkle in Time is sophisticated in concept yet warm in tone, with mystery and love coursing through its pages. Meg's shattering yet ultimately freeing discovery that her father is not omnipotent provides a satisfying coming-of-age element. Readers will feel a sense of power as they travel with these three children, challenging concepts of time, space, and the power of good over evil. (Ages 9 to 12)

1998 marks is the 35th anniversary of A Wrinkle in Time by Madeleine L'Engle. To celebrate, Bantam Doubleday Dell is publishing two wonderful new editions of L'Engle's Time Quartet, including A Wrinkle in Time; A Wind in The Door; A Swiftly Tilting Planet; and Many Waters.

A Wrinkle in Time Format: Hardcover

A Wrinkle in Time (Hardback or Cased Book)