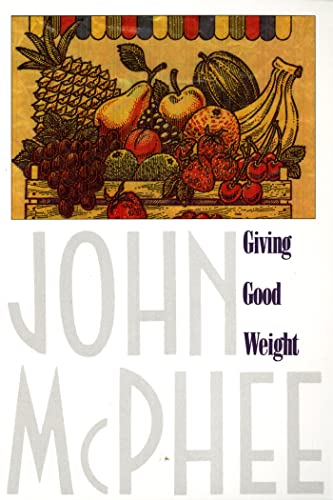 "You people come into the market―the Greenmarket, in the open air under the down pouring sun―and you slit the tomatoes with your fingernails. With your thumbs, you excavate the cheese. You choose your stringbeans one at a time. You pulp the nectarines and rape the sweet corn. You are something wonderful, you are―people of the city―and we, who are almost without exception strangers here, are as absorbed with you as you seem to be with the numbers on our hanging scales." So opens the title piece in this collection of John McPhee's classic essays, grouped here with four others, including "Brigade de Cuisine," a profile of an artistic and extraordinary chef; "The Keel of Lake Dickey," in which a journey down the whitewater of a wild river ends in the shadow of a huge projected dam; a report on plans for the construction of nuclear power plants that would float in the ocean; and a pinball shoot-out between two prizewinning journalists.

John McPhee was born in Princeton, New Jersey, and was educated at Princeton University and Cambridge University. His writing career began at Time magazine and led to his long association with The New Yorker, where he has been a staff writer since 1965. Also in 1965, he published his first book, A Sense of Where You Are, with Farrar, Straus and Giroux, and in the years since, he has written nearly 30 books, including Oranges (1967), Coming into the Country (1977), The Control of Nature (1989), The Founding Fish (2002), Uncommon Carriers (2007), and Silk Parachute (2011). Encounters with the Archdruid (1972) and The Curve of Binding Energy (1974) were nominated for National Book Awards in the category of science. McPhee received the Award in Literature from the Academy of Arts and Letters in 1977. In 1999, he was awarded the Pulitzer Prize for Annals of the Former World. He lives in Princeton, New Jersey.

Book Description Paperback. Condition: New. Paperback. "You people come into the market?the Greenmarket, in the open air under the down pouring sun?and you slit the tomatoes with your fingernails. With your thumbs, you excavat.Shipping may be from multiple locations in the US or from the UK, depending on stock availability. 288 pages. 0.318. Seller Inventory # 9780374516000