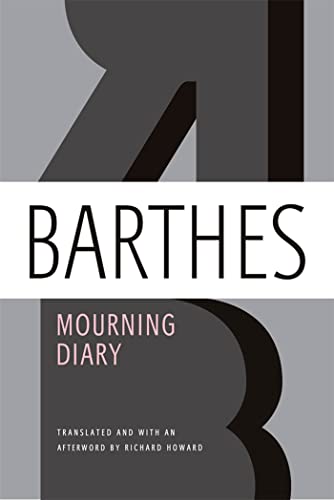 "In the sentence ‘She's no longer suffering,' to what, to whom does ‘she' refer? What does that present tense mean?" ―Roland Barthes, from his diary

The day after his mother's death in October 1977, Roland Barthes began a diary of mourning. For nearly two years, the legendary French theorist wrote about a solitude new to him; about the ebb and flow of sadness; about the slow pace of mourning, and life reclaimed through writing. Named a Top 10 Book of 2010 by The New York Times and one of the Best Books of 2010 by Slate and The Times Literary Supplement, Mourning Diary is a major discovery in Roland Barthes's work: a skeleton key to the themes he tackled throughout his life, as well as a unique study of grief―intimate, deeply moving, and universal.

Roland Barthes (1915-1980) was a French cultural and literary critic, whose clever and lyrical writings on semiotics made structuralism one of the leading movements of the twentieth century. Barthes had a cult following and published seventeen books, including Camera Lucida, Mythologies, and A Lover's Discourse.

Book Description Paperback. Condition: New. Paperback. In the sentence 'She's no longer suffering, ' to what, to whom does 'she' refer? What does that present tense mean? â "Roland Barthes, from his diaryThe day after his mother's death in Oct.Shipping may be from multiple locations in the US or from the UK, depending on stock availability. 260 pages. 0.260. Seller Inventory # 9780374533113