Items related to Crucible of War: The Seven Years' War and the Fate...

Anderson, Fred Crucible of War: The Seven Years' War and the Fate of Empire in British North America, 1754-1766

Crucible of War: The Seven Years' War and the Fate of Empire in British North America, 1754-1766 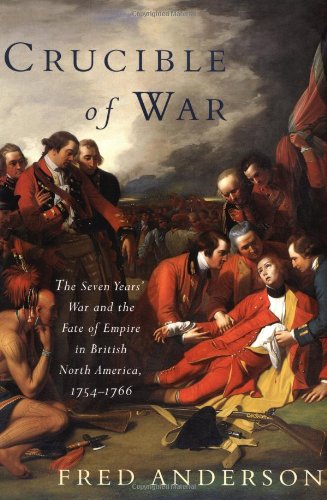 In this engrossing narrative of the great military conflagration of the mid-eighteenth century, Fred Anderson transports us into the maelstrom of international rivalries. With the Seven Years' War, Great Britain decisively eliminated French power north of the Caribbean — and in the process destroyed an American diplomatic system in which Native Americans had long played a central, balancing role — permanently changing the political and cultural landscape of North America.

Anderson skillfully reveals the clash of inherited perceptions the war created when it gave thousands of American colonists their first experience of real Englishmen and introduced them to the British cultural and class system. We see colonists who assumed that they were partners in the empire encountering British officers who regarded them as subordinates and who treated them accordingly. This laid the groundwork in shared experience for a common view of the world, of the empire, and of the men who had once been their masters. Thus, Anderson shows, the war taught George Washington and other provincials profound emotional lessons, as well as giving them practical instruction in how to be soldiers.

Depicting the subsequent British efforts to reform the empire and American resistance — the riots of the Stamp Act crisis and the nearly simultaneous pan-Indian insurrection called Pontiac's Rebellion — as postwar developments rather than as an anticipation of the national independence that no one knew lay ahead (or even desired), Anderson re-creates the perspectives through which contemporaries saw events unfold while they tried to preserve imperial relationships.

Interweaving stories of kings and imperial officers with those of Indians, traders, and the diverse colonial peoples, Anderson brings alive a chapter of our history that was shaped as much by individual choices and actions as by social, economic, and political forces.

Histories of the American Revolution tend to start in 1763, the end of the Seven Year's War, a worldwide struggle for empire that pitted France against England in North America, Europe, and Asia. Fred Anderson, who teaches history at the University of Colorado, takes the story back a decade and explains the significance of the conflict in American history. Demonstrating that independence was not inevitable or even at first desired by the colonists, he shows how removal of the threat from France was essential before Americans could develop their own concepts of democratic government and defy their imperial British protectors. Of great interest is the importance of Native Americans in the conflict. Both the French and English had Indian allies; France's defeat ended a diplomatic system in which Indian nations, especially the 300-year-old Iroquois League, held the balance between the colonial powers. In a fast-paced narrative, Anderson moves with confidence and ease from the forests of Ohio and battlefields along the St. Lawrence to London's House of Commons and the palaces of Europe. He makes complex economic, social, and diplomatic patterns accessible and easy to understand. Using a vast body of research, he takes the time to paint the players as living personalities, from George III and George Washington to a host of supporting characters. The book's usefulness and clarity are enhanced by a hundred landscapes, portraits, maps, and charts taken from contemporary sources. Crucible of War is political and military history at its best; it never flags and is a pleasure to read. --John Stevenson

"Reading Crucible of War is an enriching experience...Anderson meets the enormous challenge he has set for himself."
-- Wall Street Journal

"A wonderful narrative of the Seven Years' War...It promises to revolutionize our understanding of one of America's most important wars."
-- Jill Lepore, author of The Name of War

"Anderson carries his mastery of a vast scholarly literature lightly....His characterizations are vivid and memorable ...His wide-ranging story is eventful and fast-paced, yet always clear. His exposition of cultural conflicts, strategy, politics and diplomacy is lucid...This book will be read by many people and will be in print for a long, long time."
-- Charles Royster, New York Times Book Review

"Readable and insightful, Crucible of War is now our best study of the Seven Years' War...He has taken on the old masters of Anglo-American imperial warfare, Francis Parkman and Lawrence Gipson, and done them one better."
-- Don Higgenbotham, author of The War of American Independence

Book Description Alfred A. Knopf, 2000. Hardcover. Condition: New. Dust Jacket Condition: New. First Edition; First Printing. This specific hardback book is in new condition with a hard board cover that has sharp edges and corners and has a tight binding. The pages are clean, crisp, unmarked and uncreased. The dust jacket is in fine condition with barely detectable wear if any. We package all books in custom cardboard book boxes for shipment and ship daily with tracking numbers.; "In this engrossing narrative of the great military conflagration of the mid-eighteenth century, Fred Anderson transports us into the maelstrom of international rivalries. With the Seven Years' War, Great Britain decisively eliminated French power north of the Caribbean and in the process destroyed an American diplomatic system in which Native Americans had long played a central, balancing role permanently changing the political and cultural landscape of North America."; 9.3 X 6.4 X 2.2 inches; 912 pages. Seller Inventory # 19367

5. Crucible of War: The Seven Years' War and the Fate of Empire in British North America, 1754-1766 Anderson, Fred