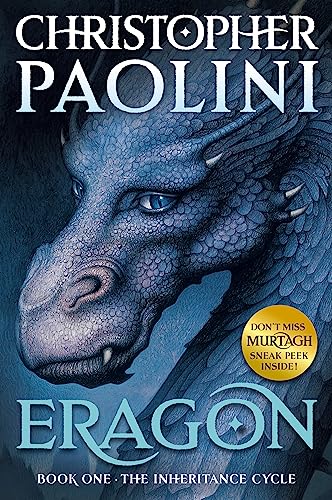 Don’t miss the latest book from the author of Eragon, The Fork, the Witch, and the Worm: Tales from Alagaësia!

Perfect for fans of Lord of the Rings, the New York Times bestselling Inheritance Cycle about the dragon rider Eragon has sold over 35 million copies and is an international fantasy sensation. With newly updated interlocking art across the spines of all four books!
Fifteen-year-old Eragon believes that he is merely a poor farm boy—until his destiny as a Dragon Rider is revealed. Gifted with only an ancient sword, a loyal dragon, and sage advice from an old storyteller, Eragon is soon swept into a dangerous tapestry of magic, glory, and power. Now his choices could save—or destroy—the Empire.

Here's a great big fantasy that you can pull over your head like a comfy old sweater and disappear into for a whole weekend. Christopher Paolini began Eragon when he was just 15, and the book shows the influence of Tolkien, of course, but also Terry Brooks, Anne McCaffrey, and perhaps even Wagner in its traditional quest structure and the generally agreed-upon nature of dwarves, elves, dragons, and heroic warfare with magic swords.

Eragon, a young farm boy, finds a marvelous blue stone in a mystical mountain place. Before he can trade it for food to get his family through the hard winter, it hatches a beautiful sapphire-blue dragon, a race thought to be extinct. Eragon bonds with the dragon, and when his family is killed by the marauding Ra'zac, he discovers that he is the last of the Dragon Riders, fated to play a decisive part in the coming war between the human but hidden Varden, dwarves, elves, the diabolical Shades and their neanderthal Urgalls, all pitted against and allied with each other and the evil King Galbatorix. Eragon and his dragon Saphira set out to find their role, growing in magic power and understanding of the complex political situation as they endure perilous travels and sudden battles, dire wounds, capture and escape.

In spite of the engrossing action, this is not a book for the casual fantasy reader. There are 65 names of people, horses, and dragons to be remembered and lots of pseudo-Celtic places, magic words, and phrases in the Ancient Language as well as the speech of the dwarfs and the Urgalls. But the maps and glossaries help, and by the end, readers will be utterly dedicated and eager for the next book, Eldest. (Ages 10 to 14) --Patty Campbell

Eragon is a very special book. It is a great story, one that will you'll remember long after you finish it. Eragon inspires passion in fans. We invite you to read Eragon and see for yourself what the buzz is all about.

Book Description Paperback. Condition: New. Reprint. Language: English. Brand new Book. A new adventure hatches in Book One of the Inheritance Cycle, perfect for fans of Lord of the Rings! This New York Times bestselling series has sold over 40 million copies and is an international fantasy sensation. Christopher Paolini is a true rarity. --The Washington Post When fifteen-year-old Eragon finds a polished blue stone in the forest, he thinks it is the lucky discovery of a poor farm boy. But when the stone brings a dragon hatchling, Eragon soon realizes he has stumbled upon a legacy nearly as old as the Empire itself. Overnight his simple life is shattered, and, gifted with only an ancient sword, a loyal dragon, and sage advice from an old storyteller, Eragon is soon swept into a dangerous tapestry of magic, glory, and power. Now his choices could save--or destroy--the Empire. And don't miss the most recent book set in Eragon's world, The Fork, the Witch, and the Worm: Tales from Alagaësia!. Seller Inventory # ABZ9780375826696