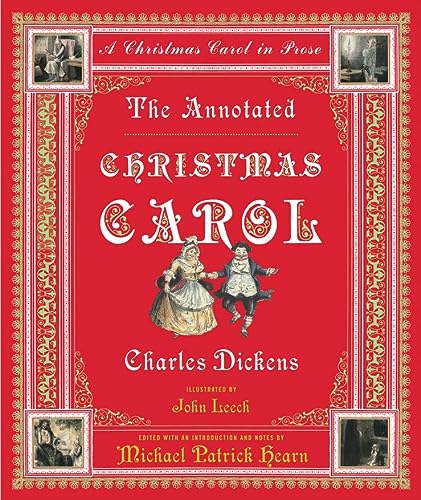 Without question, The Annotated Christmas Carol is the most authoritative and entertaining edition of Dickens classic ever produced.

What would Christmas be without A Christmas Carol? Charles Dickens’s famous ghost story is as much a part of the season as plum pudding and mistletoe, and Michael Patrick Hearn, the celebrated annotator of The Wizard of Oz and The Adventures of Huckleberry Finn, has prepared this sumptuous, thoroughly annotated edition, which has already become the definitive edition of our century. Initially published by Norton in 2004, this is the first edition to combine the original story with Dickens’s Public Reading text, published to coincide with his 1867-68 American tour, which has not been reprinted in nearly a century. Included are rare photographs as well as the original Leech wood engravings and hand-colored etchings, supplemented by other contemporary illustrations by George Cruikshank, Gustave Doré, John Tenniel, and “Phiz.” The Annotated Christmas Carol will be a literary feast for the whole family for generations. 2-color throughout, 100 black-and-white illustrations, and 8 pages of full color

Review:
In the history of English literature, Charles Dickens's A Christmas Carol, which has been continuously in print since it was first published in the winter of 1843, stands out as the quintessential Christmas story. What makes this charming edition of Dickens's immortal tale so special is the collection of 80 vivid illustrations by Everett Shinn (1876-1953). Shinn, a well-known artist in his time, was a popular illustrator of newspapers and magazines whose work displayed a remarkable affinity for the stories of Charles Dickens, evoking the bustling street life of the mid-1800s. Printed on heavy, cream-colored paper stock, the edges of the pages have been left rough, simulating the way in which the story might have appeared in Dickens's own time. Though countless editions of this classic have been published over the years, this one stands out as particularly beautiful, nostalgic, and evocative of the spirit of Christmas.
Book Description:

Traditional cover with this full-color gift edition in a slipcase.

Buy Used
Condition: Good
Buy with confidence! Book is in... Learn more about this copy