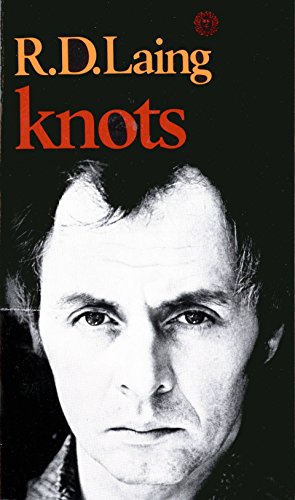 A series of dialogue-scenarios, which can be read as poems or plays, describing the "knots" and impasses in various kinds of human relationships.

"In his earlier work Laing guided the reader to understanding. In Knots he compels him to experience.... To grasp this dense and difficult book one must be willing to follow Laing in his spirals of descent. If Knots is to yield, one must yield to the knots."

"Dr. Laing's gentle determination to unpeel the bottom motive, the most inward secret of the heart, produces a curious combination of intensity and compassion....The heartbreaking ironies...belong to an artist rather than a psychiatrist....

"The voices of known demons rise from these pages: demons of guilt, demons of self-justification; demons of perverse will, demons of self-destruction. All the enemies of the human spirit are arrayed here as vividly, as warningly as in a medieval morality play. Those who believe that to unmask the enemy is a first step toward confounding him will find this a practical as well as a moral book."

R. D. Laing was a Scottish psychiatrist who wrote extensively on mental illness – in particular, the experience of psychosis. Laing's views on the causes and treatment of serious mental dysfunction, greatly influenced by existential philosophy, ran counter to the psychiatric orthodoxy of the day by taking the expressed feelings of the individual patient or client as valid descriptions of lived experience rather than simply as symptoms of some separate or underlying disorder. Laing studied medicine at the University of Glasgow. He died in 1989,

Book Description Mass Market Paperback. Condition: New. Mass Market Paperback. A series of dialogue-scenarios, which can be read as poems or plays, describing the knots and impasses in various kinds of human relationships.Shipping may be from multiple locations in the US or from the UK, depending on stock availability. 96 pages. 0.172. Seller Inventory # 9780394717760