Items related to The Fellowship Of The Ring: Being the First Part of... 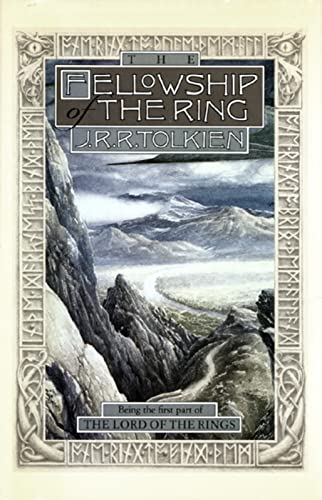 The Lord of the Rings, J.R.R. Tolkien's three-volume epic, is set in the imaginary world of Middle-earth - home to many strange beings, and most notably hobbits, a peace-loving "little people," cheerful and shy. Since its original British publication in 1954-55, the saga has entranced readers of all ages. It is at once a classic myth and a modern fairy tale. Critic Michael Straight has hailed it as one of the "very few works of genius in recent literature." Middle-earth is a world receptive to poets, scholars, children, and all other people of good will. Donald Barr has described it as "a scrubbed morning world, and a ringing nightmare world...especially sunlit, and shadowed by perils very fundamental, of a peculiarly uncompounded darkness." The story of ths world is one of high and heroic adventure. Barr compared it to Beowulf, C.S. Lewis to Orlando Furioso, W.H. Auden to The Thirty-nine Steps. In fact the saga is sui generis - a triumph of imagination which springs to life within its own framework and on its own terms.

In celebration of The Hobbit's fiftieth anniversary, the authoritative edition of its stirring sequel, The Lord of the Rings, is elegantly presented in handsome, uniform editions. The First Part of The Lord of the Rings finds Bilbo Baggins (hero of The Hobbit) preparing to celebrate his 'eleventy-first' birthday. Sixty unremarkable years have passed since his triumphant return from the orcmines, where he outwitted the horrible Gollum and carried off his magical ring----a feat that cannot go forever unavenged. The ring may hold more power than anyone suspects; indeed, dark forces are already conspiring to snatch it back.

Frodo Baggins knew the Ringwraiths were searching for him--and the Ring of Power he bore that would enable Sauran to destroy all that was good in Middle-earth. Now it was up to Frodo and his faithful servant Sam to carry the Ring to where it could be detroyed--in the very center of Sauron's dark kingdom.

Fellowship of the Ring

The Fellowship of the Ring: Being the First Part of the Lord of the Rings (Hardback or Cased Book)

Book Description Hardback or Cased Book. Condition: New. The Fellowship of the Ring: Being the First Part of the Lord of the Rings. Book. Seller Inventory # BBS-9780395489314