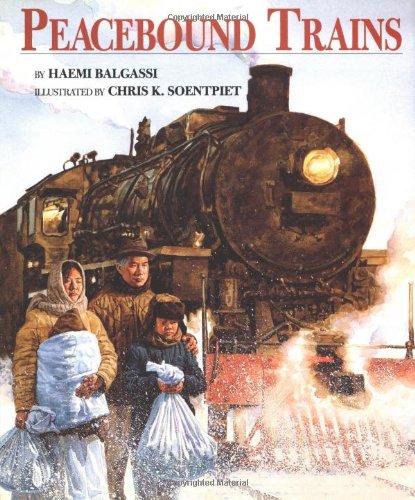 As Sumi waits for the train that will bring her mother back after a long absence, Grandmother tells how her family escaped on a train from Seoul, Korea, at the last moment before the Korean War began.

Kindergarten-Grade 3. While her mother serves a stint in the army, Korean-American Sumi, whose father is dead, lives with her harmuny (grandmother). The child longs for her mother's return, particularly as her birthday nears. Harmuny sits beside Sumi as she watches for a train and tells her the story of the "peacebound" train that saved her life and the lives of her two children (including Sumi's mother) during the communist invasion of Seoul in 1950. Harmuny also tells of her husband, Sumi's grandfather, who remained behind as a soldier and was never heard from again. Harmuny then hugs the girl and tells her that soon they will meet the train bringing her mother home "safe and sound." (Paradoxically, the illustration facing this final page of text portrays only Sumi's grandfather who did not return safe and sound.) The text, divided into short chapters, is gracefully written and told with great emotion. The richly colored illustrations are splashed with light, and convey the unfolding drama. Facial expressions are particularly effective. A brief glossary of Korean terms and an author's note about the history are appended. Readers will come away from this book with the understanding that the struggle for peace is universal and timeless, and that sometimes sacrifices must be made to achieve it.?Cynthia K. Richey, Mt. Lebanon Public Library, Pittsburgh, PA
Copyright 1997 Reed Business Information, Inc.