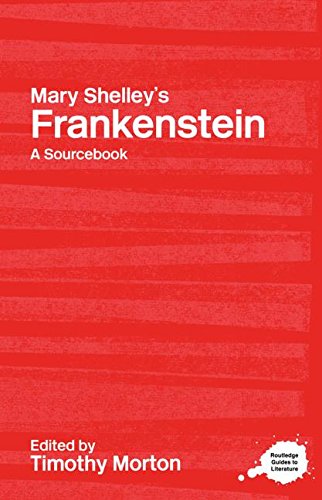 Mary Shelley's Frankenstein is one of the most widely studied works of English literature, and Frankenstein's creature is a key figure in the popular imagination.
This sourcebook examines Mary Shelley's novel within its literary and cultural contexts, bringing together material on:
*the contexts from which Frankenstein emerged
*the novel's early reception
*adaptation and performance of the work (from theatre to pop music)
*recent criticism.
All documents are discussed and explained. The volume also includes offers carefully annotated key passages from the novel itself and concludes with a list of recommended editions and further reading, to allow readers to pursue their study in the areas that interest them most. This sourcebook provides an ideal orientation to the novel, its reception history and the critical material that surrounds it.

Timothy Morton teaches English at the University of California, Davis, USA. His publications include The Poetics of Spice (2000), and Shelley and the Revolution in Taste (1994), and he is editor of Radical Food (2000).

The editors have cleverly used blocks of grey text throughout the book to separate the editorial voice from documents by other authors, and tools such as the Table of Contents, the Chronology, and the Directory of Figures make negotiating the information in the text much easier.
–Sharon Emerichs, University of Missouri-Columbia, Science Fiction Studies, 2005