Items related to The Infinite Question 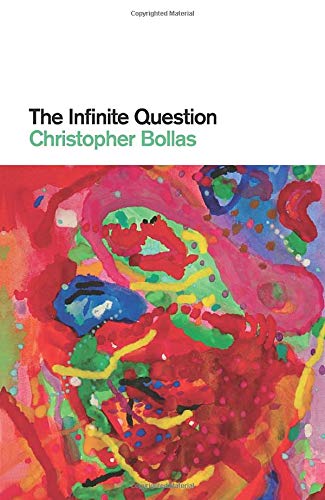 In his latest book Christopher Bollas uses detailed studies of real clinical practice to illuminate a theory of psychoanalysis which privileges the human impulse to question. From earliest childhood to the end of our lives, we are driven by this impulse in its varying forms, and The Infinite Question illustrates how Freud's free associative method provides both patient and analyst with answers and, in turn, with an ongoing interplay of further questions.

At the book's core are transcripts of real analytical sessions, accompanied by parallel commentaries which highlight key aspects of the free associative method in practice. These transcripts are contextualised by further discussion of the cases themselves, as well as a wider theoretical framework which places its emphasis on Freud's theory of the logic of sequence: by learning to listen to this free associative logic, Bollas argues, we can discover a richer and more complex unconscious voice than if we rely solely on Freud's theory of repressed ideas.

Bollas demonstrates, in an eloquent and persuasive manner, how the Freudian position of evenly suspended attentiveness enables the analyst's unconscious to catch the drift of the patient's own unconscious. He also shows that to stimulate further questioning is often of more benefit to the analytical process than to jump to an interpretation. Yet whatever fascinating course a session may take, neither the patient nor the analyst can halt the progress of the self-propelling interrogative drive.

The Infinite Question will be invaluable to both the new student and the experienced psychoanalyst, read either on its own or as a practice-based extension of the theoretical ideas elaborated in its companion volume, The Evocative Object World (also published by Routledge).

"I very much enjoyed reading these books [referring to both companion volumes]. There is something in the form of Bollas’s writing – in his character – that permeates these texts: a curiosity and passion for the unconscious life that never loses sight of its complexity. I wish that these books had existed while I was still in my training seminars, and I can only hope that they are going to be read both by students and experienced analysts over and over again. They contain a world to discover, much like unconscious life itself. They invite and stimulate the reader to deepen his or her unconscious creativity. The books have stimulated my curiosity and made me eager to try and learn more from my patients." - Anna Sylvén, The Scandinavian Psychoanalytic Review, Vol. 31, 2008

"...the experience of reading these books [referring to both companion volumes] is quite extraordinary. Beautifully written and evocatively simple, they incite the imagination and, mirroring his proposed psychoanalytic method, seem to invite the reader to muse and daydream... Perhaps Bollas’ most important contribution to clinical practice is that he reminds therapists to listen, to both the significant and the seemingly insignificant, and to get lost in the unconscious process at least sufficiently to evoke the object world and to keep questioning." – Carol Long, Psycho-analytic Psychotherapy in South Africa, Vol. 17 No. 1, 2009

"Christopher Bollas's illuminating and original [work] ...is particularly valuable for the vividness with which it describes, not just analytic ideas, but what actually happens in the consulting room....a rigour, an intuitive boldness and a seriousness that might convert any critic of psychoanalysis." - The Listener

"Christopher Bollas [has] been writing some of the most innovatory psychoanalytic theory of the last few years...What is distinctive about Bollas's work is his commitment to the unconscious―the unconscious of everyday life―without becoming speechless or too mystical in the process...One of the bemusing things about this remarkable book is that it is at once genuinely radical and curiously comforting." - The London Review of Books

"The fate of psychoanalysis as a viable mode of thought about human concerns now may rest with a few gifted writers who practice it, notably Christopher Bollas and Adam Phillips. Bollas's latest eollection of essays illustrates well his impressive knack for mining theory and his own practice for insights and stories whose force does not depend on the reader's interest or belief in psychoanalysis." - The San Francisco Chronicle

"Christopher Bollas conveys as good an impression as we are likely to get of the psychoanalytical process in action...Bollas has given us a sparkling collection of essays which combine perceptive precision with playful, almost black humour." - TLS

"Christopher Bollas draws on decades of clinical experience...and excites the imagination. His blend of theoretical speculation and clinical material is heady stuff...Bollas puts the passion back into the drama of childhood: some of what he says seems startling...makes me wish I could have read this 20 years ago." - The Guardian

"This erudite neo-Freudian study explores how each individual develops an idiom of the unconscious, a personal way of conveying one's inner experiences." - Publishers Weekly

"Bollas's own vision is one of gifted periphery and the book itself becomes a play space of creative voices and communications." - Journal of Religion and Health

"At the heart ...Bollas's project as a writer, analyst and activist, is something profoundly optimistic: his belief in the creative and curative capacities of the unconscious in even the darkest personal and cultural situations." - Psychotherapy and Politics International

"The Infinite Question represents an accumulation of work that dates back at least 30 years. It is an informative, insightful contribution that encourages therapists and analysts to listen anew to the creative responsiveness of unconscious life." - Duncan Cartwright, New Therapist November/December 2014

Book Description 2009. Paperback. Condition: New. Paperback. In his latest book Christopher Bollas uses detailed studies of real clinical practice to illuminate a theory of psychoanalysis which privileges the human impulse to question. .Shipping may be from our Sydney, NSW warehouse or from our UK or US warehouse, depending on stock availability. 192 pages. 0.227. Seller Inventory # 9780415473927