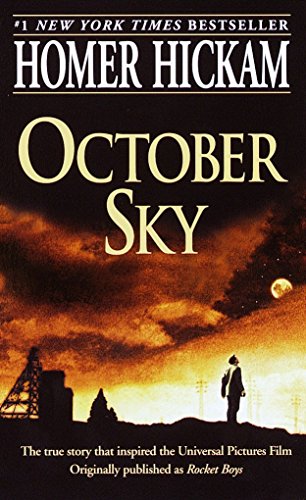 It was 1957, the year Sputnik raced across the Appalachian sky, and the small town of Coalwood, West Virginia, was slowly dying. Faced with an uncertain future, Sonny Hickam (aka Homer Hickam, Jr.) nurtured a dream: to learn how to build a rocket so he could work in the space business. The introspective son of Homer Hickam, the mine superintendent, and Elsie Lavender Hickam, a woman determined to get her sons out of Coalwood forever, Sonny gathered in five other boys and convinced them to help him. Along the way, the boys learn not only how to turn scraps of metal into sophisticated rockets but manage to give the people of Coalwood hope that the future will be brighter, at least for their children. As Sonny's parents fight in different ways to save their sons, and the people of Coalwood come together to help their Rocket Boys, Sonny and the Big Creek Missile Agency light up the sky with their flaming projectiles and dreams of glory.

Review:
Inspired by Werner von Braun and his Cape Canaveral team, 14-year-old Homer Hickam decided in 1957 to build his own rockets. They were his ticket out of Coalwood, West Virginia, a mining town that everyone knew was dying--everyone except Sonny's father, the mine superintendent and a company man so dedicated that his family rarely saw him. Hickam's smart, iconoclastic mother wanted her son to become something more than a miner and, along with a female science teacher, encouraged the efforts of his grandiosely named Big Creek Missile Agency. He grew up to be a NASA engineer and his memoir of the bumpy ride toward a gold medal at the National Science Fair in 1960--an unprecedented honor for a miner's kid--is rich in humor as well as warm sentiment. Hickam vividly evokes a world of close communal ties in which a storekeeper who sold him saltpeter warned, "Listen, rocket boy. This stuff can blow you to kingdom come." Hickam is candid about the deep disagreements and tensions in his parents' marriage, even as he movingly depicts their quiet loyalty to each other. The portrait of his ultimately successful campaign to win his aloof father's respect is equally affecting. --Wendy Smith
From the Publisher:
"[T]horoughly charming....Hickam builds a story of overcoming obstacles that is worthy of Frank Capra...[in its]...eloquent evocation of a lost time and place."
--Christopher Lehmann-Haupt, The New York Times

Book Description Paperback. Condition: New. Reissue. Language: English. Brand new Book. The true story, originally published as Rocket Boys, that inspired the Universal Pictures film.It was 1957, the year Sputnik raced across the Appalachian sky, and the small town of Coalwood, West Virginia, was slowly dying. Faced with an uncertain future, Homer Hickam nurtured a dream: to send rockets into outer space. The introspective son of the mine's superintendent and a mother determined to get him out of Coalwood forever, Homer fell in with a group of misfits who learned not only how to turn scraps of metal into sophisticated rockets but how to sustain their hope in a town that swallowed its men alive. As the boys began to light up the tarry skies with their flaming projectiles and dreams of glory, Coalwood, and the Hickams, would never be the same. Seller Inventory # ABZ9780440235507