Items related to One Flew Over the Cuckoo's Nest

Kesey, Ken One Flew Over the Cuckoo's Nest

One Flew Over the Cuckoo's Nest 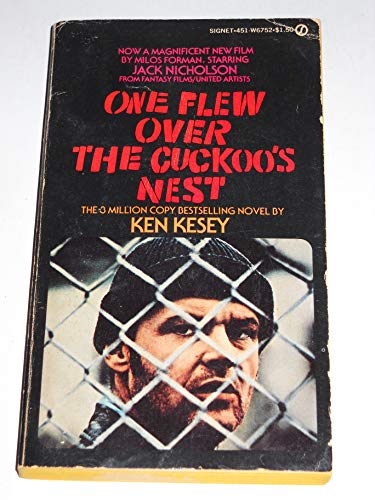 An international bestseller, Ken Kesey's One Flew Over the Cuckoo's Nest defined the 1960s era of ever-widening perspectives and ominous repressive forces. Full of mischief, insight, and pathos, Kesey's powerful story of a mental ward and its inhabitants probes the meaning of madness, often turning conventional notions of sanity and insanity on their heads.

The tale is chronicled by the seemingly mute Indian patient, Chief Bromden; its hero is Randle Patrick McMurphy, the boisterous, brawling, fun-loving rebel who encourages gambling, drinking, and sex in the ward, and rallies the other patients around him by challenging the dictatorial rule of Big Nurse. McMurphy's defiance -- which begins as a sport -- develops into a grim struggle with the awesome power of the "Combine", concluding with shattering, tragic results. In its unforgettable portrait of a man teaching the value of self-reliance and laughter destroyed by forces of hatred and fear, One Flew Over the Cuckoo's Nest is a classic parable that has left an indelible mark on the literature of our time.

KEN KESEY was born in 1935 in Colorado and grew up in Oregon. After graduating from the University of Oregon, he received a Stegner fellowship from Stanford University, where he studied fiction under Wallace Stegner, Malcolm Cowley, and Frank O'Connor. Kesey's first two novels, One Flew Over the Cuckoo's Nest and Sometimes a Great Notion, brought him great literary fame. His other books include Kesey's Garage Sale, Demon Box, The Further Inquiry, and the novels Sailor Song (1992) and, with Ken Babbs, Last Go Round. His children's books include Little Tricker the Squirrel Meets Big Double the Bear and The Sea Lion. Kesey died in 2001.

Fresh Air with TERRY GROSS, the Peabody Award-winning weekday magazine of contemporary arts and issues, is one of public radio's most popular programs. Terry Gross started out in public radio in 1973, at WBFO in Buffalo. Soon after she became producer and host of Fresh Air, then a live, daily show broadcast locally, at WHYY in 1975. Fresh Air premiered nationally in its current hour-long version in 1987, designed as the lead in to the program All Things Considered. A recipient of the 2003 Edward R. Murrow award, Terry Gross has been called by the L.A. Times "One of the most thought-provoking interviewers working in the media today."

1. One Flew Over the Cuckoo's Nest

2. One Flew Over the Cuckoo's Nest