Items related to The Ghost of Apache Creek

Joseph A. West The Ghost of Apache Creek

The Ghost of Apache Creek 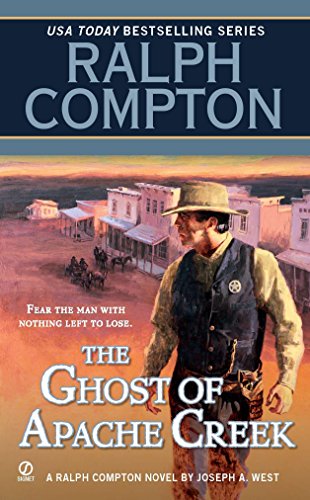 A man with nothing left to lose finds a reason to fight in this Ralph Compton western.

Requiem, formerly known as Apache Creek, is a town that has seen better days. After a plague of cholera swept through the streets, the only folk left behind are ghosts, including Marshall Sam Pace. Even though he’s still living and breathing, three years of solitude have turned Sam into a phantom—a lonely man that’s more than a little touched in the head.

But when a woman on the run stumbles into Requiem, Sam suddenly finds himself with a purpose. As Jess Leslie’s murderous pursuers track her to Requiem, the former lawman must protect her and make use of gunslinger skills long out of practice...

Ralph Compton stood six-foot-eight without his boots. He worked as a musician, a radio announcer, a songwriter, and a newspaper columnist. His first novel, The Goodnight Trail, was a finalist for the Western Writers of America Medicine Pipe Bearer Award for best debut novel. He was also the author of the Sundown Rider series and the Border Empire series.

As a little boy growing up in a small fishing village in Scotland, Joseph West enjoyed many happy Saturday mornings at the local cinema in the company of Roy and Gene and Hoppy. His lifelong ambition was to become a cowboy, but he was sidetracked by a career in law enforcement and journalism. He now resides with his wife and daughter in Palm Beach, Florida, where he enjoys horse riding, cowboy action shooting, and studying Western history.

Praise for the novels of Ralph Compton

“Compton offers readers a chance to hit the trail and not even end up saddle sore.”—Publishers Weekly

1. The Ghost of Apache Creek

2. The Ghost of Apache Creek

4. The Ghost of Apache Creek