Items related to The Concept of the Corporation

Drucker, Peter F. The Concept of the Corporation

The Concept of the Corporation 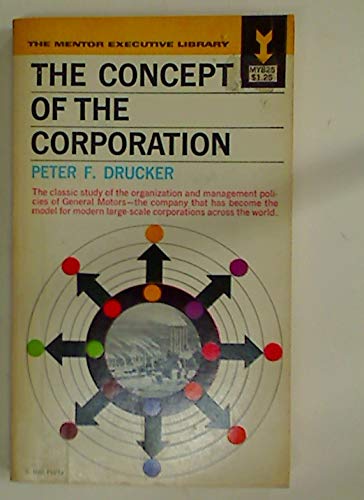 Concept of the Corporation was the first study ever of the constitution, structure, and internal dynamics of a major business enterprise. Basing his work on a two-year analysis of the company done during the closing years of World War II, Drucker looks at the General Motors managerial organization from within. He tries to understand what makes the company work so effectively, what its core principles are, and how they contribute to its successes. The themes this volume addresses go far beyond the business corporation, into a consideration of the dynamics of the so-called corporate state itself.

When the book initially appeared, General Motors managers rejected it as unfairly critical and antibusiness. Yet, the GM concept of the corporation and its principles of organization later became models for organizations worldwide. Not only businesses, but also government agencies, research laboratories, hospitals, and universities have found in Concept of the Corporation a basis for effective organization and management.

Because it offers a fundamental theory of corporate goals, this book is a valuable resource for business professionals and organization analysts. It will also be of interest to students and professionals in economics, public administration, and political science. Professional and technical readers who admire Peter Drucker’s work will want to be certain this volume is in their personal library. At a time when everything from the size to the structure of corporations is being questioned, this classic should prove a valuable guide.

Peter F. Drucker (1909-2005) is known by many as the father of modern management. He was Clarke Professor of Social Science and Management at Claremont Graduate School in California and was a recipient of the Presidential Medal of Freedom. He is the author of over thirty-five books, including The Ecological Vision, The Concept of the Corporation, and A Functioning Society.

"Concept of the Corporation is a valuable text for anyone teaching business history (broadly defined) or the history of political economy. Drucker describes one of the most important American companies at the apex of its success and elucidates the context in which it operated: labor relations, politics, regulation, and even the impact of war. At the same time, Drucker is interested in the larger issues affecting company operations, and he discusses them in a clear, often original way, with an appealing mix of pragmatism and optimism."

1. The Concept of the Corporation

2. The Concept of the Corporation

Book Description Signet, 1964. Condition: Good. A+ Customer service! Satisfaction Guaranteed! Book is in Used-Good condition. Pages and cover are clean and intact. Used items may not include supplementary materials such as CDs or access codes. May show signs of minor shelf wear and contain limited notes and highlighting. Seller Inventory # 0451618203-2-4