Items related to The Leaders We Deserved (and a Few We Didn't):...

Felzenberg, Alvin S. The Leaders We Deserved (and a Few We Didn't): Rethinking the Presidential Rating Game

The Leaders We Deserved (and a Few We Didn't): Rethinking the Presidential Rating Game 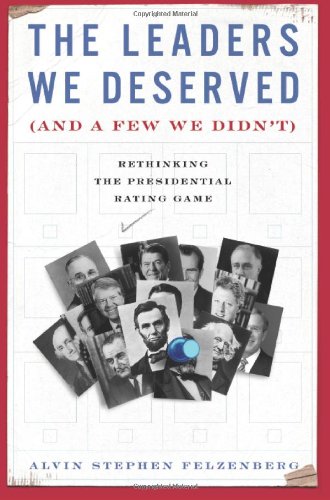 It's a perennial pastime to rate U.S. presidents on an all-time ranking: Certain presidents were Great,” others were Near-Great,” and so on down to Failures” and Unmitigated Disasters.” (OK, we made that last category up.) But as Alvin Felzenberg points out, there are many flaws with these rating systems. Despite reams of new historical information, the rankings never seem to change very much. They all favor a certain kind of president-those who tended to increase executive power. That aside, the idea of rating presidential performance on a simple linear scale is absurd. The Leaders We Deserved (and a Few We Didn't) breaks presidential performance into easily understandable categories-character, vision, competence, foreign policy, economic policy, human rights, and legacy-and assesses, for each category, the best and worst. The result is a surprisingly fresh look at how the various presidents stack up against each other, with some of the greats” coming off far worse than their supposedly mediocre colleagues.

Alvin S. Felzenberg teaches at the Annenberg School for Communication at the University of Pennsylvania. Felzenberg was the principal spokesman for the 9/11 Commission, an advisor to the Department of Defense and the Voice of America, and served in several senior staff positions at the U.S. House of Representatives, and as New Jersey's Assistant Secretary of State. His most recent book is Governor Tom Kean. He lives in Washington, D.C.

Wall Street Journal
“Written in a breezy style, "The Leaders We Deserved" is clearly intended for anyone who wants to learn something about U.S. history while observing presidents compete with one another for top rankings.”

Washington Times
“In this election year, anyone interested in the future of the nation's leadership will find this examination of the past a useful guide.”

Star-Ledger
“Felzenberg has crafted a very interesting and worthwhile read.”

James M. McPherson, author of Battle Cry of Freedom and This Mighty Scourge: Perspectives on the Civil War
“Alvin Felzenberg has written an incisive, readable book in which he offers detailed evaluations of presidents according to several key criteria. His rankings contain some surprises, with which not everyone will agree, but all readers will be stimulated and will come away better informed than before.”

Harold Holzer, Co-chairman, U.S. Abraham Lincoln Bicentennial Commission
“Alvin Felzenberg puts Lincoln and several other presidents in the full context of their times and ours, shedding much new light on those we thought we knew well, and taking a fresh look at some we need to know better. The sections on Abraham Lincoln, the most elusive of all presidents, adds much to the field of Lincoln studies and should not be missed."

Walter Isaacson, CEO of the Aspen Institute and author of Einstein: His Life and Universe
“This book goes beyond the parlor game of rating presidents and digs deeply into what qualities truly matter. By doing so, Al Felzenberg has produced a smart and fascinating look at the impact our great presidents have had.”

John J. DiIulio Jr., Frederic Fox Leadership Professor, University of Pennsylvania
“This book sets a new standard, not only for presidential studies but for leadership studies generally. In an enlightening and entertaining fashion, Felzenberg lays bare how and why some presidents have translated vision into transformational and sustainable action while others have not. For political scientists and anyone else who thinks understanding leadership matters, this book is not only must-reading but must-knowledge.”

National Review
“Felzenberg is to be credited with bringing to the presidential-ratings game a quality that had been sorely lacking: an opportunity to debate.”

Roanoke Times
“This book should be regarded as a ‘must read’ for its remarkable and thought-provoking insights as to how all of us as responsible citizens should evaluate our leaders -- past, present and future.”

1. The Leaders We Deserved (and a Few We Didn't): Rethinking the Presidential Rating Game

2. The Leaders We Deserved (and a Few We Didn't): Rethinking the Presidential Rating Game

3. The Leaders We Deserved (and a Few We Didn't): Rethinking the Presidential Rating Game