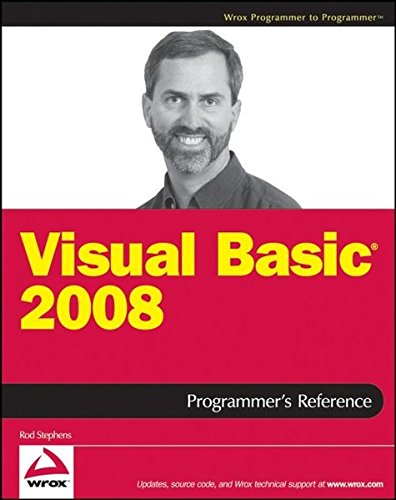 Providing programmers and developers of all skill levels with a comprehensive tutorial and reference to Visual Basic (VB) 2008, Microsoft MVP Rod Stephens presents a broad, solid understanding of essential topics on the latest version of VB. He explains the forms, controls, and other objects that VB furnishes for building applications in a modern windows environment. Plus, he examines the powerful development environment that makes VB such a productive language, and he delves into the VB language itself to show you how to use it to perform an array of important development tasks.

Note: CD-ROM/DVD and other supplementary materials are not included as part of eBook file.

Rod Stephens started out as a mathematician, but while studying at MIT, discovered the joys of programming and has been programming professionally ever since. During his career, he has worked on an eclectic assortment of applications in such fields as telephone switching, billing, repair dispatching, tax processing, wastewater treatment, concert ticket sales, cartography, and training for professional football players.
Rod is a Microsoft Visual Basic Most Valuable Professional (MVP) and ITT adjunct instructor. He has written 18 books that have been translated into half a dozen different languages, and more than 200 magazine articles covering Visual Basic, Visual Basic for Applications, Delphi, and Java. He is currently a regular contributor to DevX ( www.DevX.com ).
Rod ’ s popular VB Helper web site www.vb-helper.com receives several million hits per month and contains thousands of pages of tips, tricks, and example code for Visual Basic programmers, as well as example code for this book.

"This is certainly a tome for programmers and of course developers." GadgetSpeak.com Sunday 1 June 2008