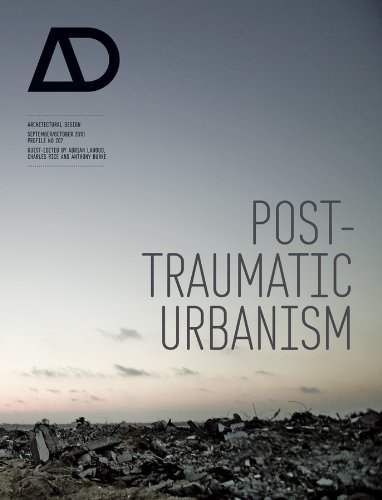 Urban trauma describes a condition where conflict or catastrophe has disrupted and damaged not only the physical environment and infrastructure of a city, but also the social and cultural networks. Cities experiencing trauma dominate the daily news. Images of blasted buildings, or events such as Hurricane Katrina exemplify the sense of 'immediate impact'. But how is this trauma to be understood in its aftermath, and in urban terms? What is the response of the discipline to the post-traumatic condition? On the one hand, one can try to restore and recover everything that has passed, or otherwise see the post-traumatic city as a resilient space poised on the cusp of new potentialities. While repair and reconstruction are automatic reflexes, the knowledge and practices of the disciplines need to be imbued with a deeper understanding of the effect of trauma on cities and their contingent realities. This issue will pursue this latter approach, using examples of post-traumatic urban conditions to rethink the agency of architecture and urbanism in the contemporary world. Post-traumatic urbanism demands of architects the mobilisation of skills, criticality and creativity in contexts in which they are not familiar. The post-traumatic is no longer the exception; it is the global condition.

About the Guest-Editors
Adrian Lahoud, Charles Rice and Anthony Burke

As a practising architect and Course Director of the Master of Advanced Architecture, Urban Design, Lahoud's work ranges across a number of scales with a particular emphasis on the Middle East. As a researcher he explores the relationship between design, conflict and politics. He is a member of the OCEAN design research network and is completing a doctorate entitled 'The Life of Forms in the City'.

Rice's research considers the interior as a spatial and experiential category in domestic and urban culture. His book The Emergence of the Interior: Architecture, Modernity, Domesticity was published by Routledge in 2007, and he is currently working on a book manuscript provisionally titled Atrium Effects: John Portman and Architecture's Discipline. Here he will consider how questions of urban renewal have, since the 1970s, been linked to particular design strategies which emphasise heightened interior effects. With current thinking and practice so focused on the envelope, climate control and security, thinking through the increasing interiority of urbanism has become a pressing issue.

Burke's research addresses questions of computational media and technology, and its implications for architecture and urbanism. A graduate of Columbia University's GSAPP in 2000, he has focused in particular on networks and systems logics within contemporary design, recently co-editing Network Practices: New Strategies in Architecture and Design (Princeton Architectural Press, 2007) with Therese Tierney. His practice, Offshore Studio, like Lahoud's practice, works across scales to test this research-led design thinking.

In this issue, Lahoud, Rice and Burke aim to wed design experimentation to politics.

Book Description 2010. Condition: NEW. 9780470744987 This listing is a new book, a title currently in-print which we order directly and immediately from the publisher. For all enquiries, please contact Herb Tandree Philosophy Books directly - customer service is our primary goal. Seller Inventory # HTANDREE0776737