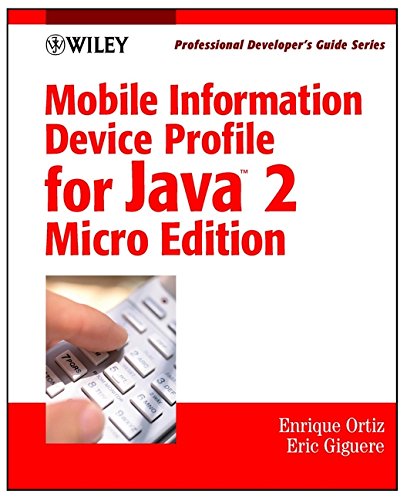 In his previous book, Java 2 Micro Edition (0-471-39065-8), Eric Giguere showed why Sun's J2ME is fast becoming the dominant language for all handheld devices. In this new book, the Ortiz-Giguere team explains how to use the J2ME Mobile Information Device Profile (MIDP) to write Java applications for wireless devices like cell phones and two-way pagers as well as more powerful devices like the Palm VII. The authors begin with a basic tutorial on J2ME, then quickly move on to explain how to use MIDP to write full-featured applications for cell phones and pagers. Using real case studies and code, they walk developers through all the necessary topics, including GUIs, client/server and peer-to-peer communications, HTTP, XML, databases, WAP, security issues, MIDP and J2EE in the Enterprise and much more.

Master the newest way of creating applications for wireless devices!

This complete guide to MIDP programming covers such topics as:
* The basics of J2ME
* How to build and run MIDP applications
* MIDP programming examples
* The MIDP user interface model
* Persisting data with MIDP
* Using HTTP as a way to exchange data with servers on the Internet
* The importance of security for wireless devices
* Writing MIDP applications that use XML
* Future directions of MIDP

The companion Web site at www.wiley.com/compbooks/ortiz updates the material in the book and provides additional examples and resources as well as current links to the various specifications and toolkits mentioned throughout the book.

C. ENRIQUE ORTIZ is Chief Mobile Architect and co-CTO for AGEA Corporation, a wireless infrastructure software company. He has served as lead developer at both Pervasive Software and IBM's Multimedia Server Development Group. Prior to IBM, he was the lead software engineer for the IBM Space Shuttle Onboard System Software. He holds a BS degree in computer science from the University of Puerto Rico.
ERIC GIGUERE is a software developer for iAnywhere Solutions, Inc., a Sybase company, where he focuses on wireless and handheld computing. He is the author of Wiley's Java 2 Micro Edition: Professional Developer's Guide and Palm Database Programming: The Complete Developer's Guide. He holds BMath and MMath degrees in computer science from the University of Waterloo.

Book Description John Wiley & Sons, 2001. Condition: Good. This is an ex-library book and may have the usual library/used-book markings inside.This book has soft covers. With usual stamps and markings, In good all round condition. Please note the Image in this listing is a stock photo and may not match the covers of the actual item,800grams, ISBN:9780471034650. Seller Inventory # 6258972

Shipping: US$ 8.21
From United Kingdom to U.S.A.
Destination, rates & speeds

Book Description Paperback. Condition: Very Good. The book has been read, but is in excellent condition. Pages are intact and not marred by notes or highlighting. The spine remains undamaged. Seller Inventory # GOR002333661