Items related to The Art of Color: The Subjective Experience and Objective...

Itten, Johannes The Art of Color: The Subjective Experience and Objective Rationale of Color

The Art of Color: The Subjective Experience and Objective Rationale of Color 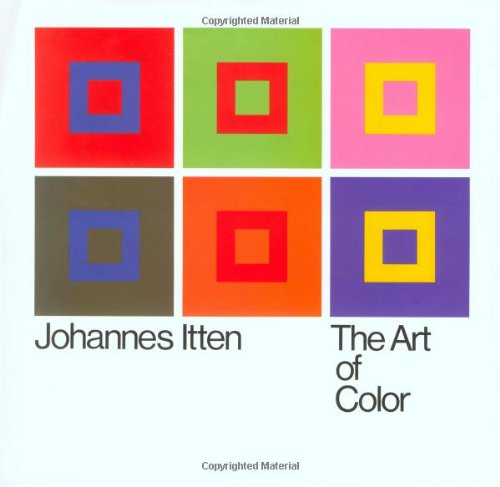 In this book, the world's foremost color theorist examines two different approaches to understanding the art of color. Subjective feelings and objective color principles are described in detail and clarified by color reproductions.

What would the world be without color? A dull, joyless melange of shapes without vital meaning. "Color is life, for a world without color seems dead. As a flame produces light, light produces color. As intonation lends color to the spoken word, color lends spiritually realized sound to form." - Johannes Itten. Over the years numerous color theories have been published: Goethe's theory of color is as famous as Ostwald's color cirlce. Adolf Holzel exercised an important influence on modern art with his theory of color. Now with his ART OF COLOR Johannes Itten makes a contribution. Using Holzel's theory as a springboard, Itten has expanded and developed it along his own original lines. Although never published before, the Itten theory already underlies progressive art education all over the world. In this book Itten examines two different approaches to understanding the art of color. Subjective feelings and objective color principles are the two poles which are described in detail and clarified with numerous color reproductions. The key to this knowledge lies in the color circle and the seven color contrasts which are found on pages 35-109. The problems of visual, emotional and symbolic color effects are carefully explored with numerous color illustrations. The systematic color exercises are followed by outstanding reproductions of paintings by the great masters - 28 large size, four-color plates - which offer insight into all the epochs of Western painting from the early Middle Ages to Klee and Picasso. With each reproduction is one of Professor Itten's famous analyses which proves how conscious awareness and use of color contrast has been an important means of expression. In the chapter, THEORY OF COLOR EXPRESSION (page 130), the psychic and emotional values expressed by color are examined and explained. This gives an extraordinary approach to the understanding of expressionistic painting. Another important chapter, COMPOSITION (page 144), contains the goal of the whole theory of color for the creative artist. It also represents the crowning point of the book for the viewer of art. According to Itten composition implies brining two or more colors together in such a way that they harmonize to give an expression unambiguous and full of character. When preparing the first printing of THE ART OF COLOR in 1960, author and publisher were faced with the problem of finding the most favorable method of producing the difficult color reproductions. It could only be done by producing the various color plates by entirely different printing processes, which had to be done by several printers, and then tipping them into the book.

When a reprinting was planned in 1973, it had by then become possible to make use of the advanced technical developments in offset printing, and the entire book was produced by this printing process. Altogether great care was taken to preserve the excellence of the original edition, Contents and order of pages were retained, some of the illustrations were enlarged and veracity was improved as far as the existing material allowed. Our aim for this new printing was to once again make available in its best form Johannes Itten's color course, while at the same time strictly adhering to his principles of presentation.

Johannes Itten (1888-1967) concerned himself with the problems of color all his life. After completing his studies as a teacher, he was able to gain firs knowledge of color theory in Stuttgart, from 1913 to 1916, in the circle of Adolf Holzel. He tested and modified this theory in his own artistic labors, as well as in intensive studies of all available color theories. Johannes Itten treated the problem of color, which present themselves to the painter who works with color as an artist and craftsman the way the scientist explores the physical and chemical properties of color.

The significance of Johannes Itten's own artistic achievements as one of the great contributions to the art of the 20th century is undisputed. His color theory, which was condensed in The Art of Color, convincingly synthesized the knowledge of the great painter and the experience of the progressive educator, two poles that stamped Itten's personality. His theory has been thoroughly disseminated all over the world, in many versions and languages.

The subjective perceptual experience and objective laws of color produce a tension of opposites shown in this book by many examples in color. A comprehensive knowledge of the objective laws is required to grow beyond the subjective laws of color is required to grow beyond the subjective narrowness of conception which is everybody's preliminary approach to the manifestations of color in everyday life and art. Itten fully understood these difficulties. The knowledge of the objective laws of color can be grasped in the color sphere and the seven color contrasts, both of which are derived from the color circle. The problems of impressionistic and expressionistic effects of color are examined in many juxtapositions of examples in color. The foundation of color composition is found through color harmony. After the color exercises, there are reproductions and analysis if the paintings of great masters, old, and new, which testify to the validity of Itten's book and its teachings.

1. The Art of Color: The Subjective Experience and Objective Rationale of Color

2. THE ART OF COLOR: THE SUBJECTIVE