Items related to Imaginary Numbers: An Anthology of Marvelous Mathematical... 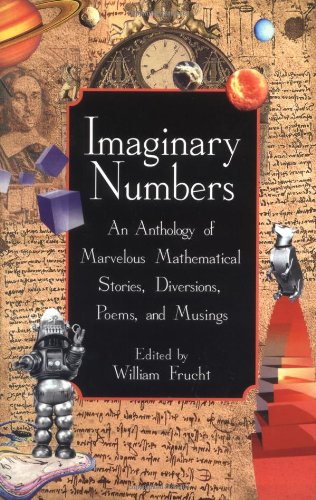 "With this delightful anthology, Frucht throws a bridge across the chasm separating the 'Two Cultures' of science and literature."--Booklist

"A marvelous colledtion of diverse talents and writing."--San Diego Union-Tribune

A wildly inventive treasury of the most artful words ever written about numbers. Mathematics and writing may seem to exist in opposite realms, but as William Frucht reveals, the world of numbers has always held a special fascination for men and women of letters. Imaginary Numbers displays the fruits of this cross-fertilization by collecting the best creative writing about mathematical topics from the past hundred years. In this engaging anthology, we can explore the many ways writers have played with mathematical ideas. Delve into the fourth dimension and infinity, into fantasy and philosophy with such masters as Lewis Carroll, Edwin Abbott Abbott, Philip K. Dick, Martin Gardner, and Alan Lightman. Revel in renowned tales by Italo Calvino and Jorge Luis Borges, cult classics such as Connie Willis's "The Schwartzschild Radius,"and lesser-known gems by such visionaries as William Gibson and A. K. Dewdney. For mathematical mavens and literary lions alike, Imaginary Numbers adds up to one fascinating read.

Review:
Don't be fooled by the title of Imaginary Numbers. Editor William Frucht hasn't devoted a book to explicating the many mysteries of the square root of minus one. What he has done is far more impressive. Pursuing what he envisions as "a truly literary science fiction," Frucht has dared to collect an idiosyncratic company of writers--including such disparate names as Rudy Rucker, Italo Calvino, William Gibson, and Lewis Carroll--into one eclectic, accomplished anthology. The unifying theme of these writings, the short stories, essays, out-loud ponderings, even poetry, is the world of mathematics: every contributor is either "using mathematics to tell stories or using stories to explain mathematics," what Frucht describes as two sides of the same coin.

What Einstein's Dreams did for time, Imaginary Numbers does for mathematics, posing a meditation that manages to be thought provoking, intellectually rigorous, and simply delightful all at the same time. (In fact, an excerpt from Alan Lightman's Einstein's Dreams appears in the collection.) Some of the titles might be familiar--like Gibson's "Burning Chrome" or Jorge Luis Borges's "Library of Babel"--but the breadth of Frucht's selections ensures that you'll find more than a few undiscovered gems within. --Paul Hughes

From the Inside Flap:
Imaginary Numbers Enter the wildly inventive world of Imaginary Numbers, in which a marvelous roster of acclaimed writers conjure up magical happenings, fantastic visions, and brainteasing puzzles, all based in some way on mathematical ideas. This delightful anthology offers a connoisseur’s selection of a special brand of creative writing in which the authors play with a vast array of mathematical notions—from the marvels of infinity to the peculiarities of space-time to quantum weirdness, the relativity of time, and the curious attraction of black holes. Enjoy Edwin Abbott Abbott’s wonderfully satirical commentary on the hard life of irregular figures, excerpted from his classic Flatland. Ponder Douglas Hofstadter’s story of the incredible mathematical re-creation of Johann Sebastian Bach playing his famous composition "The Well-Tempered Clavier" and contemplate the art of writing a beautiful fugue. Puzzle over Lewis Carroll’s problem of the flower garden that looks like a serpent with corners. Savor Philip Dick’s poignant tale of the golden man who can run at the speed of light and predict the trajectories of randomly fired bullets. Tease out the implications of Andrew Marvell’s brilliant analogy between love and parallel lines. Become absorbed in william Gibson’s dystopian matrix world that looks like "a 3-D chessboard, infinite and perfectly transparent." As editor William Frucht writes, "Using mathematics to tell stories and using stories to explain mathematics are two sides of the same coin." The work of the creative writers collected here has blazed the trail for a new kind of writing, traveling beyond the dimensions of traditional narrative to create and explore visions of life and its possibilities that capture the beauty and intellectual thrill of seeing our world through mathematical eyes.