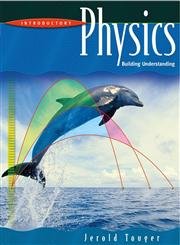 The Next Wave In Physics Education!

Jerold Touger is an experienced teacher as well as an active researcher in cognitive aspects of physics teaching and learning. He received his own physics education at Cornell University (B.A., 1966) and the City University of New York (Ph.D., 1974). That education has continued through 28 years of full-time teaching at Curry College in Milton, Massachusetts, where he is now Professor of Physics. At Curry he has developed his own courses and course materials, some with NSF support, and has reported on this work in the American Journal of Physics and the Journal of College Science Teaching. He has also been involved with the physics teaching profession more broadly. He has chaired the Committee on Research in Physics Education of the American Association of Physics Teachers (AAPT), is a past president of the AAPT's New England Section, and has done curriculum development for TERC in Cambridge, Massachusetts.

For over fifteen years, he has maintained an active research association with the Physics Education Research Group at the University of Massachusetts at Amherst, supported at various times by three successive NSF Research Opportunity Awards and a Visiting research Professorship. His research finding shave appeared in several journal articles and in the proceedings of four international conferences. His own research and that of his collaborators, together with a broad and deep exposure to the outcomes and applications of physics education research, establish much of the perspective from which he has written this textbook.

Book Description Paperback. Condition: NEW. International Edition, Paperback, Brand New, ISBN and Cover image may differ but contents similar to U.S. Edition, Printed in Black & White. End Chapter Exercises may differ. No CD/Access code. Legal to use despite any disclaimer, We do not ship to PO , APO and FPO adresses.Choose Expedited Shipping for FASTER DELIVERY within 4-5 business days.Customer Satisfaction Guaranteed. Seller Inventory # US_9788126508686