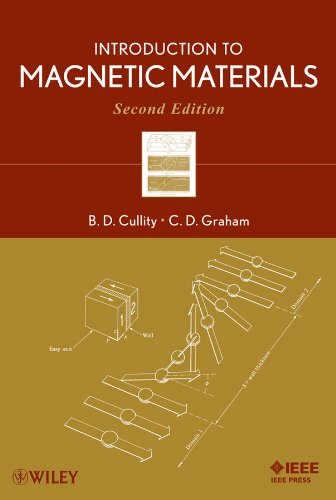 Introduction to Magnetic Materials, 2nd Edition covers the basics of magnetic quantities, magnetic devices, and materials used in practice. While retaining much of the original, this revision now covers SQUID and alternating gradient magnetometers, magnetic force microscope, Kerr effect, amorphous alloys, rare-earth magnets, SI Units alongside cgs units, and other up-to-date topics. In addition, the authors have added an entirely new chapter on information materials. The text presents materials at the practical rather than theoretical level, allowing for a physical, quantitative, measurement-based understanding of magnetism among readers, be they professional engineers or graduate-level students.

B. D. Cullity wrote Introduction to Magnetic Materials explicitly for beginners, at the level of senior undergraduates or first-year graduate students. His ability to write about complex technical topics in a clear, coherent manner made the book an instant classic, and it has remained a popular introduction to the subject for students and teachers alike. Now, more than three decades since its initial publication, Introduction to Magnetic Materials has been revised and updated in this eagerly awaited Second Edition.

Introduction to Magnetic Materials, Second Edition retains much of the original content, while also including updated or new coverage of:

The material is presented at a practical level, allowing readers to develop a solid understanding of magnetic properties, quantities, and behavior. This timely new edition will be useful to students as well as engineers and scientists involved with magnetic phenomena, materials, and measurements. It crosses traditional disciplinary boundaries, covering topics in solid-state physics, materials science, electrical engineering, and computer science. It can serve as a basic learning and reference work for all those who need to understand the essentials of magnetic behavior.

The Late B. D. Cullity was a group leader for the Manhattan Project in WWII, and then became professor of metallurgical engineering at Notre Dame University. He is best known for two widely used textbooks, Elements of X-Ray Diffraction and this book, Introduction to Magnetic Materials. His major research interests were in the use of x-ray diffraction to measure lattice strains and in magnetostrictive phenomena.

C. D. Graham worked at the General Electric Research Laboratory for fifteen years before moving in 1969 to the Department of Materials Science and Engineering at the University of Pennsylvania. He has published works on magnetic domain structure, anisotropy, thin films, permanent magnets, amorphous alloys, and magnetic measurements, plus several book chapters and three encyclopedia articles.

Book Description Condition: New. Brand New Original US Edition.We Ship to PO BOX Address also. EXPEDITED shipping option also available for faster delivery.This item may ship fro the US or other locations in India depending on your location and availability. Seller Inventory # AUDUU-59921

Shipping: US$ 20.03
From United Kingdom to U.S.A.
Destination, rates & speeds

Shipping: US$ 5.01
From United Kingdom to U.S.A.
Destination, rates & speeds

Shipping: US$ 8.68
From United Kingdom to U.S.A.
Destination, rates & speeds