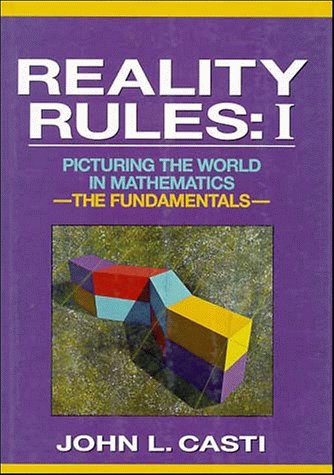 "Casti Tours offers the most spectacular vistas of modern applied mathematics" â??Nature
Mathematical modeling is about rulesâ??the rules of reality. Reality Rules explores the syntax and semantics of the language in which these rules are written, the language of mathematics. Characterized by the clarity and vision typical of the author's previous books, Reality Rules is a window onto the competing dialects of this languageâ??in the form of mathematical models of real-world phenomenaâ??that researchers use today to frame their views of reality.

Moving from the irreducible basics of modeling to the upper reaches of scientific and philosophical speculation, Volumes 1 and 2, The Fundamentals and The Frontier, are ideal complements, equally matched in difficulty, yet unique in their coverage of issues central to the contemporary modeling of complex systems.

Engagingly written and handsomely illustrated, Reality Rules is a fascinating journey into the conceptual underpinnings of reality itself, one that examines the major themes in dynamical system theory and modeling and the issues related to mathematical models in the broader contexts of science and philosophy. Far-reaching and far-sighted, Reality Rules is destined to shape the insight and work of students, researchers, and scholars in mathematics, science, and the social sciences for generations to come.

Mathematical Models of Nature and Man

A thoroughly modern account of the theory and practice of mathematical modeling with a treatment focusing on system-theoretic concepts such as complexity, self-organization, adaptation, bifurcation, resilience, surprise and uncertainty, and the mathematical structures needed to employ these in a formal system.

An Instructor's Manual presenting detailed solutions to all the problems in the book is available from the Wiley editorial department.

An account of the grammar and syntax of the language in which reality rules are written--the language of mathematics. Coverage includes a discussion of computation and complexity running the gamut from Godel's Incompleteness Theorem and its work in artificial intelligence to the problem of NP-completeness and the complexity of numerical algorithms to the relation between chaos and stock-price fluctuations. Each chapter contains a significant amount of research problems and ends with discussion questions. Features an extended, annotated bibliography.

John L. Casti is a member of the faculty of the Santa Fe Institute and a professor at the Technical University of Vienna. He is the author of Alternate Realities, Paradigms Lost, Searching for Certainty, Complexification, and Five Golden Rules. Dr. Casti is the executive editor of Complexity, a journal published by John Wiley.