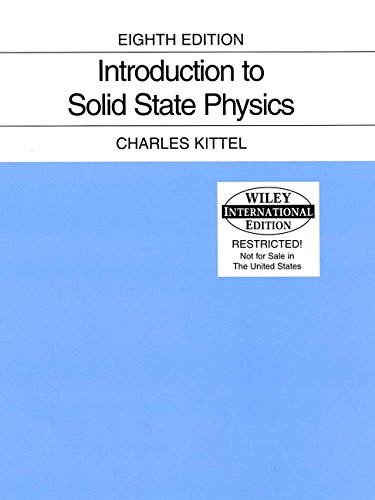 Since the publication of the first edition over 50 years ago, Introduction to Solid State Physics has been the standard solid state physics text for physics students. The author's goal from the beginning has been to write a book that is accessible to undergraduates and consistently teachable. The emphasis in the book has always been on physics rather than formal mathematics. With each new edition, the author has attempted to add important new developments in the field without sacrificing the book's accessibility and teachability. A very important chapter on nanophysics has been written by an active worker in the field. This field is the liveliest addition to solid state science during the past ten years The text uses the simplifications made possible by the wide availability of computer technology.

Charles Kittel did his undergraduate work in physics at M.I.T and at the Cavendish Laboratory of Cambridge University. He received his Ph.D. from the University of Wisconsin. He worked in the solid state group at Bell Laboratories, along with Bardeen and Shockley, leaving to start the theoretical solid state physics group at Berkeley in 1951. His research has been largely in magnetism and in semiconductors. In magnetism he developed the theories of ferromagnetic and antiferromagnetic resonance and the theory of single ferromagnetic domains, and extended the Bloch theory of magnons. In semiconductor physics he participated in the first cyclotron and plasma resonance experiments and extended the results to the theory of impurity states and to electron-hole drops.

He has been awarded three Guggenheim fellowships, the Oliver Buckley Prize for Solid State Physics, and, for contributions to teaching, the Oersted Medal of the American Association of Physics Teachers, He is a member of the National Academy of Science and of the American Academy of Arts and Sciences.

Book Description John Wiley & Sons, 2004. Condition: Good. A+ Customer service! Satisfaction Guaranteed! Book is in Used-Good condition. Pages and cover are clean and intact. Used items may not include supplementary materials such as CDs or access codes. May show signs of minor shelf wear and contain limited notes and highlighting. Seller Inventory # 0471680575-2-4

Book Description John Wiley & Sons, 2004. Hardcover. Condition: Good. This is an International Edition Item may show signs of shelf wear. Pages may include limited notes and highlighting. May include supplemental or companion materials if applicable. Access codes may or may not work. Connecting readers since 1972. Customer service is our top priority. Seller Inventory # mon0002067999

Book Description Hardback. Condition: Very Good. The book has been read, but is in excellent condition. Pages are intact and not marred by notes or highlighting. The spine remains undamaged. Seller Inventory # GOR004407455

Book Description Hardback. Condition: Good. The book has been read but remains in clean condition. All pages are intact and the cover is intact. Some minor wear to the spine. Seller Inventory # GOR005363088