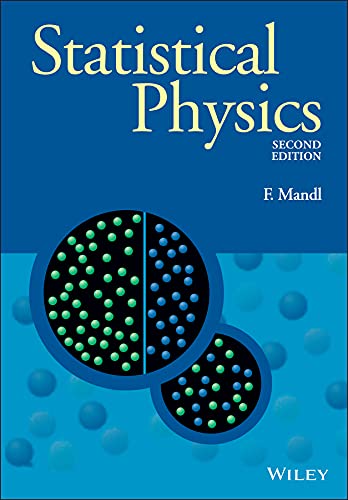 Statistical Physics, Second Edition develops a unified treatment of statistical mechanics and thermodynamics, which emphasises the statistical nature of the laws of thermodynamics and the atomic nature of matter. Prominence is given to the Gibbs distribution, leading to a simple treatment of quantum statistics and of chemical reactions. Undergraduate students of physics and related sciences will find this a stimulating account of the basic physics and its applications. Only an elementary knowledge of kinetic theory and atomic physics, as well as the rudiments of quantum theory, are presupposed for an understanding of this book. Statistical Physics, Second Edition features:

Franz Mandl is the author of Statistical Physics, 2nd Edition, published by Wiley.

Book Description 1988. Condition: NEW. 9780471915331 This listing is a new book, a title currently in-print which we order directly and immediately from the publisher. For all enquiries, please contact Herb Tandree Philosophy Books directly - customer service is our primary goal. Seller Inventory # HTANDREE0745829

Shipping: US$ 20.52
From United Kingdom to U.S.A.
Destination, rates & speeds