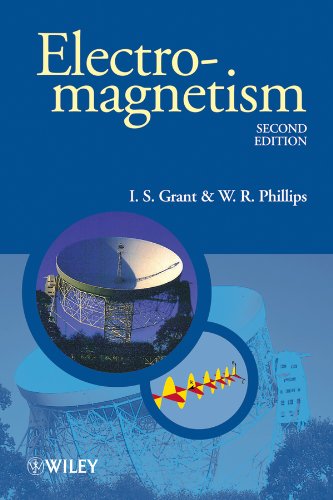 The Manchester Physics Series General Editors: D. J. Sandiford; F.Mandl; A. C. Phillips Department of Physics and Astronomy,University of Manchester Properties of Matter B. H. Flowers and E.Mendoza Optics Second Edition F. G. Smith and J. H. ThomsonStatistical Physics Second Edition F. Mandl Electromagnetism SecondEdition I. S. Grant and W. R. Phillips Statistics R. J. BarlowSolid State Physics Second Edition J. R. Hook and H. E. HallQuantum Mechanics F. Mandl Particle Physics Second Edition B. R.Martin and G. Shaw the Physics of Stars Second Edition A. C.Phillips Computing for Scientists R. J. Barlow and A. R. BarnettElectromagnetism, Second Edition is suitable for a first course inelectromagnetism, whilst also covering many topics frequentlyencountered in later courses. The material has been carefullyarranged and allows for flexi-bility in its use for courses ofdifferent length and structure. A knowledge of calculus and anelementary knowledge of vectors is assumed, but the mathematicalproperties of the differential vector operators are described insufficient detail for an introductory course, and their physicalsignificance in the context of electromagnetism is emphasised. Inthis Second Edition the authors give a fuller treatment of circuitanalysis and include a discussion of the dispersion ofelectromagnetic waves. Electromagnetism, Second Edition features:
* The application of the laws of electromagnetism to practicalproblems such as the behaviour of antennas, transmission lines andtransformers.
* Sets of problems at the end of each chapter to help studentunderstanding, with hints and solutions to the problems given atthe end of the book.
* Optional "starred" sections containing more specialised andadvanced material for the more ambitious reader.
* An Appendix with a thorough discussion of electromagneticstandards and units.

Recommended by many institutions. Electromagnetism. SecondEdition has also been adopted by the Open University as the coursebook for its third level course on electromagnetism.

I. S. Grant and W. R. Phillips are the authors of Electromagnetism, 2nd Edition, published by Wiley.

Book Description 1991. Paperback. Condition: New. 2nd. Paperback. The Manchester Physics Series General Editors: D. J. Sandiford; F. Mandl; A. C. Phillips Department of Physics and Astronomy, University of Manchester Properties of Matter B. H. Flowers an.Shipping may be from multiple locations in the US or from the UK, depending on stock availability. 542 pages. 0.970. Seller Inventory # 9780471927129

Book Description 1990. Condition: NEW. 9780471927129 This listing is a new book, a title currently in-print which we order directly and immediately from the publisher. For all enquiries, please contact Herb Tandree Philosophy Books directly - customer service is our primary goal. Seller Inventory # HTANDREE0746251

Shipping: US$ 20.12
From United Kingdom to U.S.A.
Destination, rates & speeds