Items related to Transport Phenomena and Unit Operations: A Combined... 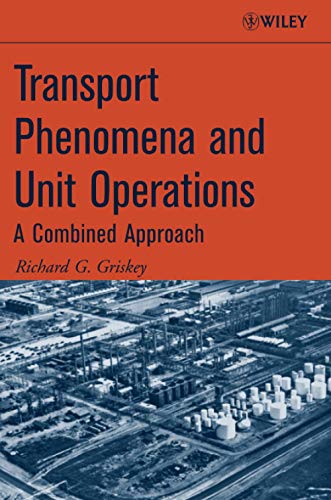 The subject of transport phenomena has long been thoroughly and expertly addressed on the graduate and theoretical levels. Now Transport Phenomena and Unit Operations: A Combined Approach endeavors not only to introduce the fundamentals of the discipline to a broader, undergraduate-level audience but also to apply itself to the concerns of practicing engineers as they design, analyze, and construct industrial equipment.

Richard Griskey's innovative text combines the often separated but intimately related disciplines of transport phenomena and unit operations into one cohesive treatment. While the latter was an academic precursor to the former, undergraduate students are often exposed to one at the expense of the other. Transport Phenomena and Unit Operations bridges the gap between theory and practice, with a focus on advancing the concept of the engineer as practitioner. Chapters in this comprehensive volume include:

Each chapter contains a set of comprehensive problem sets with real-world quantitative data, affording students the opportunity to test their knowledge in practical situations. Transport Phenomena and Unit Operations is an ideal text for undergraduate engineering students as well as for engineering professionals.

"I love this book, since it starts with the derivation of the Navier-Stokes equation for Momentum Transport and presents the similar complicated equations (for undergraduate students) for heat and mass transfer with their corresponding terms, without going into the complicated derivations.... It also allows the students to start from a common, most general equation that they could start from, instead of memorizing the different equations that apply to different circumstances." - Prof. F. Handan Tezel, University of Ottawa

"His preface statement seems correct. A book that combines transport phenomena and unit operations is one that could be useful for chemical engineering departments." - Prof. Harold Knickle, University of Rhode Island

Shipping: US$ 46.77
From United Kingdom to U.S.A.
Destination, rates & speeds