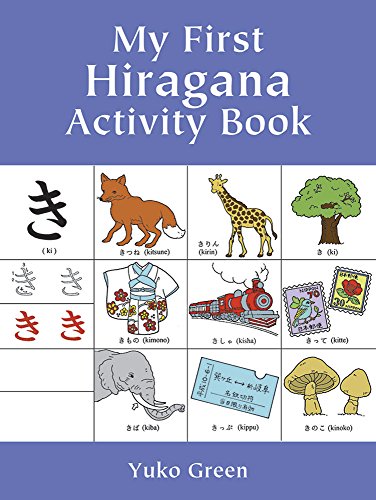 This entertaining and instructive activity book introduces English-speaking children to simple words in the Japanese language. Japanese youngsters just beginning to read and write also will find the easy-to-follow book helpful. Spaces are provided for drawing each hiragana symbol with one, two, or three strokes.
Forty-six characters make up the basic Japanese hiragana, or alphabet, with each symbol of the hiragana depicting a syllable rather than a single letter. With these 46 characters, you'll be able to write hundreds of words in Japanese — from ahiru (duck), ame (candy)‚ and atama (head) to yuki (snow), yuri (lily), and yubi (finger).
For each character, there is a selection of ready-to-color illustrations of items whose names begin with that character — more than 330 words in all — along with the word in Japanese characters. A separate list accompanies the Japanese word with a transliteration and an English translation. The book also lists 58 hiragana "modified syllables" used to form thousands of additional words.

Book Description Paperback. Condition: New. Paperback. Forty-six characters comprising the Japanese alphabet allow English-speaking children (or Japanese youngsters beginning to read and write) to jot down simple words in Japanese - from ahiru.Shipping may be from multiple locations in the US or from the UK, depending on stock availability. 48 pages. 0.353. Seller Inventory # 9780486413365