Items related to Discourse on Bodies in Water (Phoenix Edition) 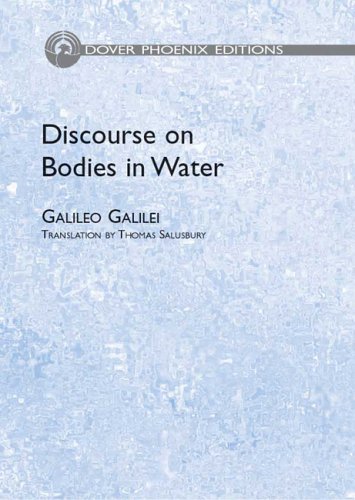 This provocative 1612 essay outraged the author's contemporaries by challenging Aristotelian physics and by asserting that sunspots are actual spots on the surface of the sun or in its atmosphere, rather than satellites.
Discourse on Bodies in Water was Galileo's first published contribution to experimental physics, the field in which his enduring fame is founded. It is distinguished among the works of its time by its repeated recourse to observational and experimental data in opposition to philosophical doctrines. Its experiments require no elaborate equipment and no technique beyond patience. This simplicity of its experimental approaches, along with the accessibility of its language (it was originally published in Italian, rather than Latin), gave the book a great and immediate popularity.
Galileo's enemies--the professors, courtiers, and clergymen intent upon preventing the spread of a belief in the motion of the earth--rushed to rebuttal. Although harmless to religion and society, the Discourse inspired the organized opposition that ultimately suppressed Galileo's scientific freedom. This edition of his landmark work features an informative Introduction, Explanatory Notes, and an Index.

Galileo Galilei (1564 1642) was an Italian physicist, mathematician, philosopher, and astronomer.

Stillman Drake was Professor Emeritus at University of Toronto and his illustrious academic career spans over four decades.