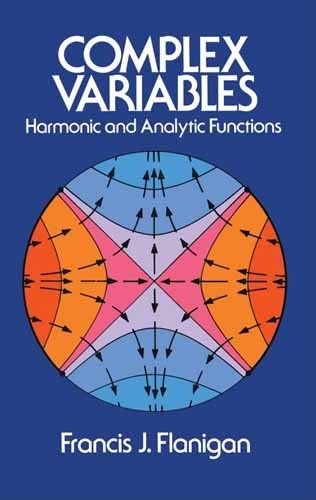 A caution to mathematics professors: Complex Variables does not follow conventional outlines of course material. One reviewer noting its originality wrote: "A standard text is often preferred [to a superior text like this] because the professor knows the order of topics and the problems, and doesn't really have to pay attention to the text. He can go to class without preparation." Not so here — Dr. Flanigan treats this most important field of contemporary mathematics in a most unusual way. While all the material for an advanced undergraduate or first-year graduate course is covered, discussion of complex algebra is delayed for 100 pages, until harmonic functions have been analyzed from a real variable viewpoint. Students who have forgotten or never dealt with this material will find it useful for the subsequent functions. In addition, analytic functions are defined in a way which simplifies the subsequent theory. Contents include: Calculus in the Plane, Harmonic Functions in the Plane, Complex Numbers and Complex Functions, Integrals of Analytic Functions, Analytic Functions and Power Series, Singular Points and Laurent Series, The Residue Theorem and the Argument Principle, and Analytic Functions as Conformal Mappings.
Those familiar with mathematics texts will note the fine illustrations throughout and large number of problems offered at the chapter ends. An answer section is provided. Students weary of plodding mathematical prose will find Professor Flanigan's style as refreshing and stimulating as his approach.

Shipping: US$ 45.75
From United Kingdom to U.S.A.
Destination, rates & speeds