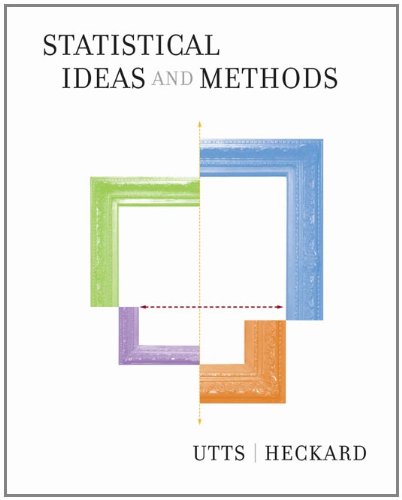 Emphasizing the conceptual development of statistical ideas, STATISTICAL IDEAS AND METHODS actively engages students and explains topics in the context of excellent examples and case studies. This text balances the spirit of statistical literacy with statistical methodology taught in the introductory statistics course. Jessica Utts and Robert Heckard built the book on two learning premises: (1) New material is much easier to learn and remember if it is related to something interesting or previously known; (2) New material is easier to learn if you actively ask questions and answer them for yourself. More than any other text available, STATISTICAL IDEAS AND METHODS motivates students to develop their statistical intuition by focusing on analyzing data and interpreting results as opposed to focusing on mathematical formulation. STATISTICAL IDEAS AND METHODS provides the exciting coverage from the authors' acclaimed MIND ON STATISTICS along with coverage of additional discrete random vari

Jessica Utts is a Professor of Statistics at the University of California at Davis, where she joined the faculty in 1978. She received her B.A. in Math and Psychology at SUNY Binghamton, and her M.A. and Ph.D. in Statistics at Penn State University. She is the author of SEEING THROUGH STATISTICS (3rd edition, 2005) and the co-author with Robert Heckard of STATISTICAL IDEAS AND METHODS (1st edition, 2006) both published by Duxbury Press. She is also the Editor-in-Chief of CYBERSTATS, an interactive online introductory statistics course. Jessica has been active in the Statistics Education community at the high school and college level. She served as a member and then chaired the Advanced Placement Statistics Development Committee for six years, and was a member of the American Statistical Association task force that produced the GAISE (Guidelines for Assessment and Instruction in Statistics Education) recommendations for Elementary Statistics courses. She is the recipient of the Academic Senate Distinguished Teaching Award and the Magnar Ronning Award for Teaching Excellence, both at the University of California at Davis. She is also a Fellow of the American Statistical Association, the Institute of Mathematical Statistics and the American Association for the Advancement of Science. Beyond statistics education Jessica's major contributions have been in applying statistics to a variety of disciplines, most notably to parapsychology, the laboratory study of psychic phenomena. She has appeared on numerous television shows, including Larry King Live, ABC Nightline, CNN Morning News and 20/20, and most recently appears in a documentary included on the DVD with the movie "Suspect Zero."