Items related to A Concise Introduction to Logic (with iLrn™...

A Concise Introduction to Logic (with iLrn™ Printed Access Card) 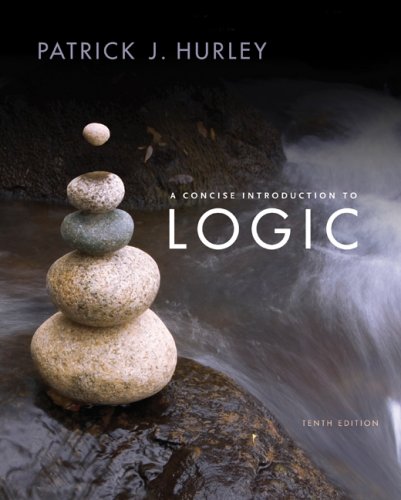 Tens of thousands of students have learned to be more discerning at constructing and evaluating arguments with the help of Patrick J. Hurley. Hurley's lucid, friendly, yet thorough presentation has made A CONCISE INTRODUCTION TO LOGIC the most widely used logic text in North America. In addition, the book's accompanying technological resources, such as CengageNOW and Learning Logic, include interactive exercises as well as video and audio clips to reinforce what you read in the book and hear in class. In short, you'll have all the assistance you need to become a more logical thinker and communicator.

Patrick Hurley was born in Spokane, Washington in 1942. He received his bachelor's degree in mathematics (with a Physics minor) from Gonzaga University in 1964 and his Ph.D. in philosophy of science with an emphasis in history of philosophy from Saint Louis University in 1973. In 1972 he began teaching at the University of San Diego, where his courses have included logic, philosophy of science, metaphysics, process philosophy, and legal ethics. In 1987 he received his J.D. from the University of San Diego and he is currently a member of the California Bar Association. He retired from teaching in 2008, but continues his research and writing. His interests include music, art, opera, environmental issues, fishing, and skiing.

1. A Concise Introduction to Logic (with iLrnâ ˘ Printed Access Card)

2. A CONCISE INTRODUCTION TO LOGIC

3. A CONCISE INTRODUCTION TO LOGIC

4. A Concise Introduction to Logic (with iLrn(TM) Printed Access Card)