Items related to Wars of the Third Kind: Conflict in Underdeveloped...

Wars of the Third Kind: Conflict in Underdeveloped Countries 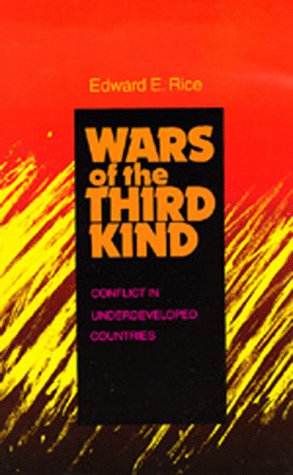 Most of the armed conflicts since World War II have been neither conventional nor nuclear, but wars of a third kind, usually fought in the Third World and relying heavily, although not exclusively, on guerrilla warfare. Edward E. Rice examines a number of conflicts of this sort, starting with the American Revolution, but concentrating on the Chinese Civil War, the Huk rebellion in the Philippines, the wars in Algeria and in Vietnam, and the repeated conflicts in Latin America. He explores the origin, organization, and motivation of wars of the third kind, their rural and popular nature, the conversion of guerrilla armies to regular armies, and conceptual approaches to counterinsurgency. Rice concludes with an analysis of the perils of these wars for the great powers.

About the Author:
Edward E. Rice, for thirty-four years a Foreign Service officer, is a former Deputy Assistant Secretary of State and author of Mao's Way (California, 1972), which won the Commonwealth Club gold medal.
Review:
"An elegantly written and carefully researched book, for which the most obvious adjective is 'wise.' The quality of the thought and the grasp of political and social dynamics that have gone into it make it superior to most other books dealing with this sort of conflict. The importance of an appreciation of the historical roots of any conflict as demonstrated by Rice provides in itself a vital lesson on the perils of untutored intervention." -- Lawrence Freedman, International Affairs

"In his insightful, scholarly, and very readable analysis of these conflicts, the author skillfully draws upon his accumulated experience in the Foreign Service and applies a generous portion of political savvy and common sense." -- Edward Costello, Foreign Service Journal

"Rice's book is lucidly argued, well written, and cautionary in its conclusions. It deserves to be read by policy makers." -- Victor T. LeVine, Choice

"Wars of the Third Kind is a superior book -- one of the very best on a very important suject. . . . Of particular interest is a fascinating chapter on the perils that await great powers who find themselves enmeshed in 'wars of the third kind.' This chapter should be required reading for every American policymaker." (Colonel Dennis M. Drew ,USAF, Airpower Journal