Items related to The Book of Memory: A Study of Memory in Medieval Culture...

The Book of Memory: A Study of Memory in Medieval Culture (Cambridge Studies in Medieval Literature, Series Number 10) 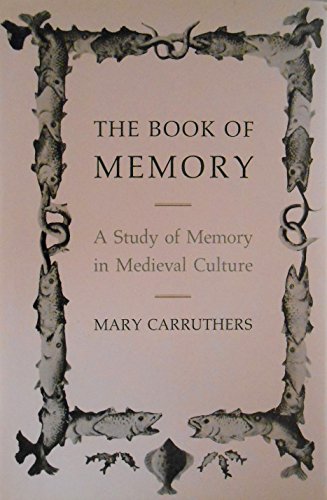 The Book of Memory is a magisterial and beautifully illustrated account of the workings and function of memory in medieval society. Memory was the psychological faculty valued above all others in the period stretching from late antiquity through the Renaissance. The prominence given to memory has profound implications for the contemporary understanding of all creative activity, and the social role of literature and art. Drawing on a range of fascinating examples from Dante, Chaucer, and Aquinas to the symbolism of illuminated manuscripts, this unusually wide-ranging book offers new insights into the medieval world.

Book Description:
Mary Carruthers's classic study of the training and uses of memory in European cultures during the Middle Ages has fundamentally changed the way scholars understand medieval culture. This fully revised and updated second edition considers afresh all the material and conclusions of the first.
About the Author:
Mary Carruthers is the author of The Craft of Thought (Cambridge 1998) and The Medieval Craft of Memory (University of Pennsylvania 2002) as well as of The Book of Memory (1990 and 2008). She divides her time between New York City and Oxford, where she holds the positions of Remarque Professor of Literature at New York University and Fellow of All Souls College.

The Book of Memory: A Study of Memory in Medieval Culture (Cambridge Studies in Medieval Literature, Series Number 10)