Items related to Beyond Beef: The Rise and Fall of the Cattle Culture

Rifkin, Jeremy Beyond Beef: The Rise and Fall of the Cattle Culture

Beyond Beef: The Rise and Fall of the Cattle Culture 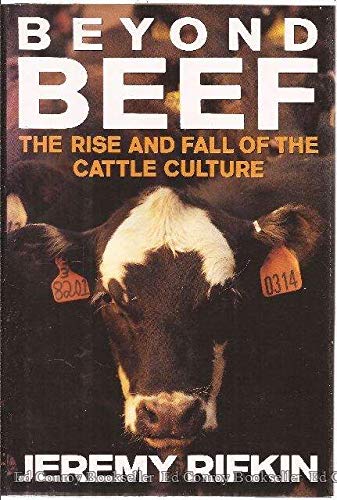 Rifkin (Biosphere Politics, p. 460, etc.), who seems to turn out environmental calls to arms on an assembly line, now turns his guns on beef--in this survey of the cattle culture's destructive role in the modern world and in history. Citing the works of others, Rifkin points to paleolithic bull and cow cults, to the clash several millennia ago between peaceful matrilineal agriculturalists and nomadic cattle herders who arose around the Ukraine and spread throughout the Old World, and to the North American West--where native populations and the buffalo they lived off were displaced and slaughtered to make room for the cattle industry, much of it financed by British interests, and where US taxpayers continue to subsidize beef ranchers and packers. None of this is original; and readers of vegetarian and animal- rights literature will already be familiar with the points addressed in Rifkin's subsequent indictment of our multinational- driven cattle culture with its devastating effect on the economies of developing countries; on the lives of starving Third World populations; and on the health of affluent populations who ``gorge'' on beef, tropical forests, the water supply, soil, and the global atmosphere. Animal Factories (1980) by Jim Mason and Peter Singer, as well as Food First (1977) and other works by Frances Moore Lapp‚ and Joseph Collins, are among the widely read works that are more forcefully and solidly argued. Nor are Rifkin's modish touches of punning deconstruction truly eye-opening. Rifkin's vision of a future ``beyond beef'' is only that, absent strategies or specifics. Still, by putting all this readably together, he might well win a new and different audience. -- Copyright ©1991, Kirkus Associates, LP. All rights reserved.

Cattle and other livestock consume more than one third of the world's grain while billions of people go hungry. Meanwhile, affluent Americans, Europeans and Japanese gorge on beef and increasingly die from heart disease, cancer and other diseases closely correlated with consumption of meat and dairy products. Rifkin ( Entropy ) drives home the moral paradoxes inherent in this situation in a timely, tremendously important book that ranks with Peter Singer's Animal Liberation and John Robbins's Diet for a New America as a call to nutritional sanity, environmental ethics and awakened conscience. The chapter on lax inspection procedures and abysmal conditions in slaughterhouses is shocking. Backed by persuasive evidence, Rifkin states that cattle are a major cause of pollution, deforestation, desertification and, through the methane they produce, global warming. Charting the human-bovine relationship from the Lascaux caves to the junk-food hamburger, he suggestively argues that beef-eating has helped support male dominance, gender and class hierarchies, and myths of meat as a sign of strength and virility.
Copyright 1992 Reed Business Information, Inc.

1. Beyond Beef: The Rise and Fall of the Cattle Culture

2. Beyond Beef: The Rise and Fall of the Cattle Culture

3. Beyond Beef: The Rise and Fall of the Cattle Culture Rifkin, Jeremy