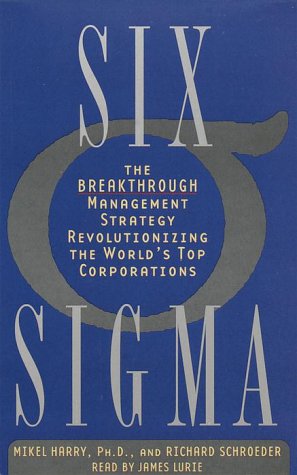 Six Sigma is the most powerful breakthrough management tool ever devised, promising increased market share, cost reductions and dramatic improvements in bottom-line profitability for companies of any size. The darling of Wall Street, it has become the mantra of Fortune 500 boardrooms around the world because it works.

What is Six Sigma? It is first and foremost a business process that enables companies to increase profits dramatically by streamlining operations, improving quality, and eliminating defects or mistakes in everything a company does. While traditional quality programs have focused on detecting and correcting defects, Six Sigma encompasses something broader: It provides specific methods to re-create the process itself so that defects are never produced in the first place. This is the reason Wall Street and corporations as diverse as Allied Signal, Honda, Maytag, Raytheon, Texas Instruments, Canon Hitachi, Lockheed Martin, American Express, Toshiba, Du Pont, and Polaroid have embarked on corporate wide Six Sigma programs.

Mikel Harry and Richard Schroeder think they've figured out a management program that really works. While at Motorola in the 1980s, they helped pioneer Six Sigma, a process that "guides companies into making fewer mistakes in everything they do--from filling out a purchase order to manufacturing airplane engines." Since then, the two have left Motorola and have turned Six Sigma into a lucrative business that saw over $100 million in consulting contracts in 1998. And now the book.

In Six Sigma: The Breakthrough Management Strategy Revolutionizing the World's Top Corporations, Harry and Schroeder explain Six Sigma and show how it's working at companies such as General Electric, Polaroid, and Allied Signal. The authors contend that most companies today are working at a "sigma" level of between 3.5 and 4, and that with just a one-sigma shift, companies will experience "a 20 percent margin improvement, a 12 to 18 percent increase in capacity, a 12 percent reduction in the number of employees," as well as "a 10 to 30 percent capital reduction." Sigma is a quality metric that counts the number of defects per million opportunities (DPMO). For example, a sigma level of 3.5 means that a process has 22,700 DPMO; a sigma level of 4.5, 1,350 DPMO; and a perfect six sigma, 3 DPMO.

At the heart of Six Sigma is the notion that quality saves money--lots of money. Harry and Schroeder argue that for most companies "the cost of quality is roughly 25 to 40 percent of sales revenue ... at six sigma the cost of quality declines to less than one percent of sales revenue." The idea is not to create quality-assurance programs but to eliminate the need for them altogether. When a company is operating at six sigma, costs that would otherwise go to inspection, rework, warranties, and customer service drop to the bottom line. Six Sigma is a compelling concept that many companies have tied their futures to. Well written, this book is a great introduction for investors, managers, and anyone who sees Six Sigma on the horizon. --Harry C. Edwards

What the business world is saying about Six Sigma:

"[Six Sigma] is the most important initiative GE has ever undertaken--it is part of the genetic code of our future leadership."
--Jack Welch, CEO, GE

"We've taken the difficult but basic Six Sigma skill of reducing defects and applied it to every business process, from inventing and commercializing a new product all the way to billing and collections after the product is delivered. Just as we think we've generated the last dollar of profit out of a business, we uncover new ways to harvest cash as we reduce cycle times, lower inventories, increase output, and reduce scrap. The results are better and more competitively priced products, more satisfied customers who give us more business, and improved cash flow."
--Larry Bossidy, CEO, AlliedSignal