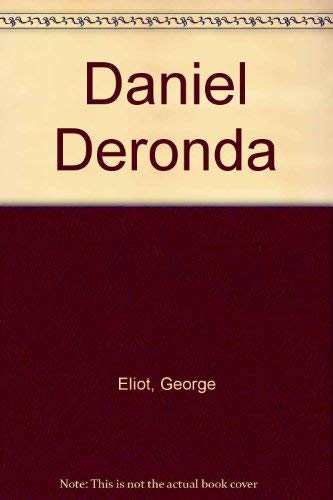 George Eliot's final novel, Daniel Deronda, was also her most controversial. Few had a problem, upon its publication in 1876, with its portrayal of yearning and repression in the English upper class. But as Eliot's lover, George Henry Lewes, had predicted: "The Jewish element seems to me likely to satisfy nobody." Deronda was the first of Eliot's novels to be set in her own period, the late 19th century, and in it she took on what was a highly unusual contemporary theme: the position of Jews in British and European society and their likely prospects. The eponymous hero is an idealistic young aristocrat who comes to the rescue of a young Jewish woman and in his attempts to help her find her family is drawn steadily deeper into the Jewish community and the ferment of early Zionist politics.

George Eliot's final novel and her most ambitious work, Daniel Deronda contrasts the moral laxity of the British aristocracy with the dedicated fervor of Jewish nationalists. Crushed by a loveless marriage to the cruel and arrogant Grandcourt, Gwendolen Harleth seeks salvation in the deeply spiritual and altruistic Daniel Deronda. But Deronda, profoundly affected by the discovery of his Jewish ancestry, is ultimately too committed to his own cultural awakening to save Gwendolen from despair.
This Modern Library Paperback Classic is set from the 1878 Cabinet Edition.

“Daniel Deronda is a startling and unexpected novel . . . it is a cosmic myth, a world history, and a morality play.” —A. S. Byatt

Book Description Paperback. Condition: Very Good. The book has been read, but is in excellent condition. Pages are intact and not marred by notes or highlighting. The spine remains undamaged. Seller Inventory # GOR008188800

Book Description Paperback. Condition: Good. The book has been read but remains in clean condition. All pages are intact and the cover is intact. Some minor wear to the spine. Seller Inventory # GOR003253797

Book Description Paperback. Condition: Fair. A readable copy of the book which may include some defects such as highlighting and notes. Cover and pages may be creased and show discolouration. Seller Inventory # GOR003737792

Book Description HarperCollins Distribution Services, 1970. Condition: Good. New edition. Ships from the UK. Former Library book. Shows some signs of wear, and may have some markings on the inside. Seller Inventory # GRP91402218

Book Description Panther, 1970. Condition: Good. This is an ex-library book and may have the usual library/used-book markings inside.This book has soft covers. In good all round condition. Seller Inventory # 7807423