Items related to The Last Caesar 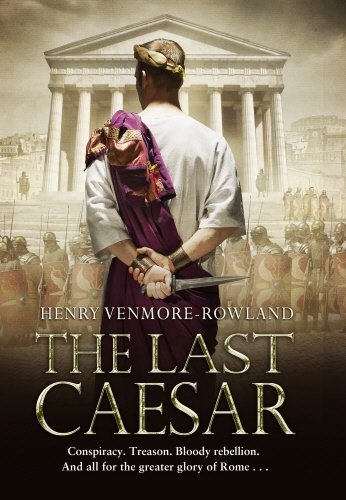 AD 68. The tyrant emperor Nero has no son and no heir.

Suddenly there's the very real possibility that Rome might become a republic once more. But the ambitions of a few are about to bring corruption, chaos and untold bloodshed to the many.

Among them is a hero of the campaign against Boudicca, Aulus Caecina Severus. Caught up in a conspiracy to overthrow Caesar's dynasty, he commits treason, raises a rebellion, faces torture and intrigue -- all supposedly for the good of Rome. The boundary between the good of Rome and self preservation is far from clear, and keeping to the dangerous path he's chosen requires all Severus' skills as a cunning soldier and increasingly deft politician.

And so Severus looks back on the dark and dangerous time history knows as the Year of the Four Emperors, and the part he played -- for good or ill -- in plunging the mighty Roman empire into anarchy and civil war.

HENRY VENMORE-ROWLAND was born and bred in rural Suffolk. Aside from the occasional family holiday, often to Italy, his only escape from school and village life was in the pages of historical fiction. His fascination with military and political history, the kings and battles approach, somehow got him into Oxford to read Ancient & Modern History at St. John's College. After dedicating so much time to reading grand tales of epic wars and political intrigue, trying his hand at writing such a story was always inevitable. The Last Caesar is his first novel. He lives in Suffolk.

· "Fast, colourful and engaging, The Last Caesar is a period yarn in the best traditions of Scarrow and Cornwell and fans of both will love it!" --M.C. Scott, bestselling author of the Rome series

Shipping: US$ 10.51
From United Kingdom to U.S.A.
Destination, rates & speeds