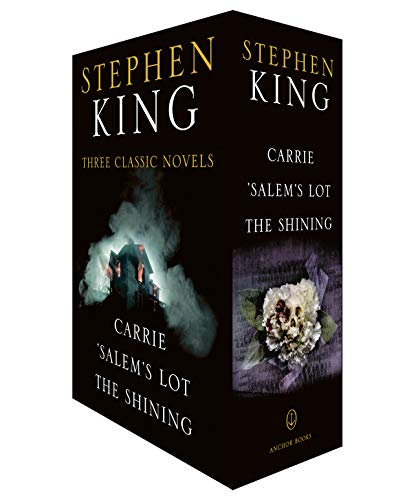 In Carrie, a teenage girl is tormented and teased to the breaking point by her more popular schoolmates. But Carrie has a gift and she uses this gift to inflict a terrifying revenge.

In 'Salem's Lot, Ben Mears has returned to Jerusalem's Lot, an old mansion, long the subject of town lore, to work on his new book. But when two young boys venture into the woods and only one comes out alive, Mears begins to realize that there is something evil growing within the borders of this small New England town.

In The Shining, Jack Torrance's new job as the off-season caretaker at the Overlook Hotel is the perfect chance for a fresh start. But as the harsh winter weather sets in, the idyllic location feels ever more remote . . . and more sinister. And the only one to notice the strange and terrible forces gathering around the Overlook is Danny Torrance, a uniquely gifted five-year-old.

STEPHEN KING is the author of more than fifty books, all of them worldwide bestsellers. Among his most recent are 11/22/63; Full Dark, No Stars; Under the Dome; Just After Sunset; Duma Key; Lisey's Story; Cell; and the concluding novels in the Dark Tower saga: Wolves of the Calla, Song of Susannah, and The Dark Tower. His acclaimed nonfiction book, On Writing, is also a bestseller. He was the recipient of the 2003 National Book Foundation Medal for Distinguished Contribution to American Letters, and in 2007, he received the Grand Master Award from the Mystery Writers of America. He lives in Maine with his wife, novelist Tabitha King.

"Guaranteed to chill you." --The New York Times on Carrie

"'Salem's Lot was--and still is--a hugely impressive novel. . . . It's the slowest of slow burns, all hints and drip-feed. . . . When the chaos finally unfolds, it's a real payoff." --The Guardian (London) on 'Salem's Lot

"Scary! . . . Serves up horrors at a brisk, unflagging pace." --The New York Times on The Shining

Shipping: US$ 25.59
From United Kingdom to U.S.A.
Destination, rates & speeds