Items related to Kelly 'n' Me 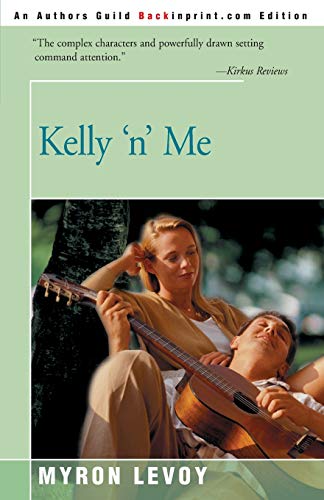 Anthony, fifteen, helps his mother, a has-been actress, pay the bills by playing guitar in Central Park. One day he meets Kelly Callahan, a girl with a beautiful voice, singing in the park, and they work up an act together. They become successful street performers- and fall in love. But Kelly is not who she claims to be. When she reveals her true life, their friendship is severely tested. A great deal of action. Will appeal to thoughtful teens.School Library Journal Easy to read and lots of fun.The Bulletin of the Center for Childrens Books

Myron Levoy's Young Adult novels have received many honors including ALA Best Books, U.S. National Book Award Finalist, and the national awards of Holland, Austria, and Germany for Alan and Naomi, which was made into a motion picture. His work frequently depicts outsiders-often with humor-searching for identity and connection, with growing insight into their own true selves.

Grade 8-10-- Anthony Milano, struggling to earn money to help his mother pay for their necessities, meets Kelly, a girl who is also playing a guitar and singing outside the Central Park Zoo in New York City. They team up professionally and personally, quickly becoming close enough to share secrets. Anthony's problems are obvious (shy, low self-esteem, his mother drinks too much.) But Kelly is clearly more deeply troubled. She gives all of her earnings away to homeless people; lies about her identity; and eventually reveals that her family is wealthy, that she hates them, and that she wants to run away while they are in Europe. Stunned when her parents are about to make an early return, Kelly convinces herself to face them. She makes a botched attempt to convey her feelings, however, and is determined to leave. Ever thoughtful and loyal to both his mother and Kelly, Anthony is suddenly forced to choose between them. As quickly as things seem to happen in this story, the characters develop slowly and credibly. There is a great deal of action in the simple plot that will appeal to thoughtful teens. --Linda Tashbook, Carnegie Library of Pittsburgh, PA
Copyright 1992 Reed Business Information, Inc.