Items related to Chit Chat This 'n That: The Rocky Road to Success

Winograd, Teddi Chit Chat This 'n That: The Rocky Road to Success

Chit Chat This 'n That: The Rocky Road to Success 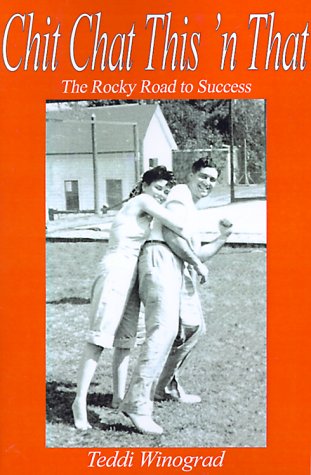 Teddi’s father thought this was a “mans world,” so it was only natural when she was born to be named “Teddy.” Defining her life was being a close knit twin, the not so roaring twenties, the depressing depression, going to work in her first pair of high heels at the age of thirteen selling millinery for twenty cents an hour.

The highlight of her life was meeting her wonderful Sam who proposed to her within an hour on their first date—making her a war bride six months later. Since it was evident that fashion was Teddi’s forte at the age of four, she became a designer in the apparel business.

In 1960 Teddi grabbed Sam’s hand and moved to Beverly Hills—swimming pools at night, movie stars at Gelson’s, and bow blouses at full price. Sambo officially changed Teddi’s name with an “I”—he thought she was too feminine to have a masculine name. They went in to their own company, named “Teddi of California.” It took seven hard years before they made a profit, turning their company into a $35 million-dollar success story.

At Teddi they left on the crest of the wave—after twenty-five years they were ready to retire. There was so much they wanted to do. Unfortunately, the dreadful Parkinson’s disease put a crimp in their plans. Sam spent twelve years putting up a fight before he had to go—he never complained. Her wonderful Sambo was a ‘man of all seasons.’ Teddi stayed close to home, chronicling their lives in this remarkable rags to riches story.

As a long time entrepreneur myself, let me congratulate you on a productive life and a successful business career.

Read what people are saying about Chit Chat This 'n That...

You epitomize the Horatio Alger tradition of America, where the immigrant families have continued to create the great nation that now leads the world in so many ways.

All of the best, Art Linkletter

How exciting to get your latest Chit Chat. Wow! The narrative has really evolved into a work of beauty. We loved looking at the photos throughout the book! When I started as a Resource Development Director, I took all the things you taught me, put 'em to work, and I am blossoming in this community.

Thanks for all your help, Ingrid Chapman

Not only do you write using a great "conversationalist" style, but you are interesting, compelling, insightful and thoroughly fun to read. I am totally enjoying the work!

What a fascinating book about the fascinating life of a fascinating woman! Your book was funny, sad, frustrating, fun and most of all, full of love. I think in your business, you proved the motto, "If life gives you lemons, make lemonade." You took fabric and slow-selling styles and redid them to great success and profit! How clever you are! I read Chit Chat over the weekend, stopping only to eat and sleep.

"...the Horatio Alger tradition of America...to create the great nation that now leads the world in so many ways. -- Art Linkletter, TV/Radio Personality

1. Chit Chat This 'n That: The Rocky Road to Success Winograd, Teddi