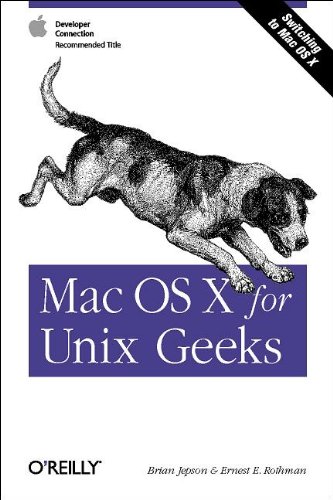 If you're one of the many Unix developers drawn to Mac OS X for its BSD core, you'll find yourself in surprisingly unfamiliar territory. Even if you're an experienced Mac user, Mac OS X is unlike earlier Macs, and it's radically different from the Unix you've used before, too.Enter "Mac OS X for Unix Geeks" by Brian Jepson and Ernest E. Rothman, two Unix geeks who found themselves in the same place you are. Their new book is your guide to figuring out the BSD Unix system and Mac-specific components that are making your life difficult and to help ease you into the Unix inside Mac OS X. This concise book includes such topics as:

The book wraps up with a quick manpage-style reference to the "Missing Manual Pages"--commands that come with Mac OS X although there are no manpages.If you find yourself disoriented by the new Mac environment, Mac OS X for Unix Geeks can help you acclimate yourself quickly to the familiar, yet foreign, Unix landscape.

It's about time: Mac OS X for Unix Geeks arrives on the scene none too soon for UNIX aficionados who, having heard that the latest editions of Mac OS are based on a UNIX variant, want to see how the platform compares to more venerable versions of the eminently configurable operating system. This book highlights some key differences between the Darwin environment and more conventional UNIXs, enabling people with UNIX experience to take advantage of it as they learn the Mac OS X way of doing things at the command line.

This skinny volume neither aims to teach its readers UNIX nor introduce them to the Mac, but rather to show how Apple has implemented UNIX. It's a fast read that assumes--as the title implies--rather a lot of UNIX knowledge. With that requirement satisfied and this book in hand, you're likely to discover aspects of Aqua more quickly than you otherwise would have.

The authors spend lots of time explaining how administrative tasks--such as managing groups, users, and passwords--are handled in the Mac OS environment. They document netinfo fully, and call attention to its limitations (like its inability to create home directories for users) by explaining how to do the job on the command line. They also cover C programming in the Darwin universe at greater length than any other book does, providing explicit instructions for such important tasks as creating header files and linking static libraries. A guide to the command line (they call the reference section--groan--"The Missing Manpages") provides good value at this book's conclusion. --David Wall

Topics covered: How to get around in Darwin, the UNIX implementation built into Mac OS X. Sections deal with basic maneuvering at the command line, LDAP services, C programming, and graphical user interfaces under Aqua. There's a short section on building the kernel itself, but it's limited in scope.

Demistifying the Geekier Side of Mac OS X