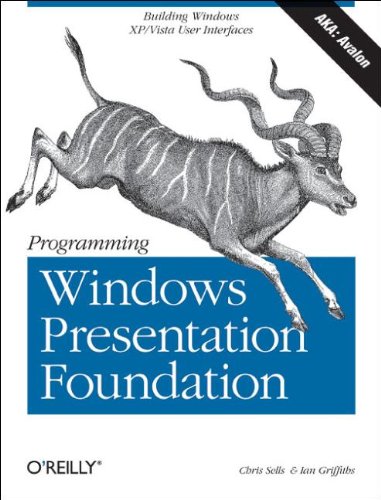 Windows Presentation Foundation (WPF) (formerly known by its code name "Avalon") is a brand-new presentation framework for Windows XP and Windows Vista, the next version of the Windows client operating system. For developers, WPF is a cornucopia of new technologies, including a new graphics engine that supports 3-D graphics, animation, and more; an XML-based markup language (XAML) for declaring the structure of your Windows UI; and a radical new model for controls.

Programming Windows Presentation Foundation, authored by Microsoft Software Legend Chris Sells and WPF guru Ian Griffiths, is the book you need to get up to speed on WPF. By page two, you'll have written your first WPF application, and by the end of Chapter 1, "Hello WPF," you'll have completed a rapid tour of the framework and its major elements. These include the XAML markup language and the mapping of XAML markup to WinFX code; the WPF content model; layout; controls, styles, and templates; graphics and animation; and, finally, deployment.

The next generation of Windows applications is going to blaze a trail into the unknown. WPF represents the best of the control-based Windows world and the content-based web world; it's an engine just itching to be taken for a spin. Inside, you'll find the keys to the ignition.

Updated samples and change notes for the move from the February CTP to Beta 2 are now available from the example site: http://www.sellsbrothers.com/writing/avbook/

Chris Sells is a Program Manager for the Connected Systems Division. He's written several books, including Programming Avalon, Windows Forms Programming in C# and ATL Internals. In his free time, Chris hosts various conferences and makes a pest of himself on Microsoft internal product team discussion lists. More information about Chris, and his various projects, is available at http://www.sellsbrothers.com

Ian Griffiths is an independent consultant, developer, speaker, and author. He has written books on the Windows Presentation Foundation, Windows Forms, and Visual Studio. He lives in London but can often be found on various developer mailing lists and newsgroups, where a popular sport is to see who can get him to write the longest email in reply to the shortest possible question. More information about what Ian is up to can be found on his blog at http://www.interact-sw.co.uk/iangblog/