Items related to Chang's Paper Pony (I Can Read Book) 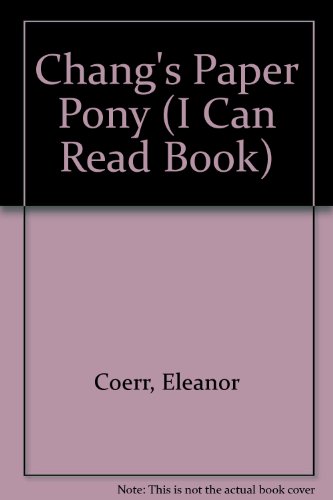 Chang longs for a pony to ease the loneliness he feels in his new country, but even in Gold Rush California, enough gold to buy a pony is hard to come by

Eleanor Coerr is the author of many books for young readers, including The Big Baloon Race, a Reading Rainbow book, Chang's Paper Pony, and The Josefina Story Quilt, a Notable Children’s Trade Book in the Field of Social Studies.

It's the time of the Gold Rush in this I Can Read title; young Chang and his Grandpa Li work in the kitchen of the Gold Ditch Hotel in San Francisco. Since arriving from China, Chang has suffered indignities: he has been ostracized by American children and teased by the miners. Chang longs for a pony of his own, a pony to love and to ease the loneliness, but Grandpa says the only one they can afford is a paper onethe painting tacked above the stove. Kindly Big Pete, a miner, shows Chang how to dig and pan for gold, but he lacks enough for a pony. Then he finds gold dust where he least expects it. Although brief and simple, the story is rich in atmosphere, history and emotion. Coerr brings to young readers not only a satisfying tale, but a portrayal of an aspect of 19th century California history rarely attempted at this level. Ray's forceful drawings support the text well and firmly establish the dusty mining-town environment. She is particularly adept at showing the vulnerability of children, as well as the ways in which large and small joys affect them. Ages 5-8.
Copyright 1988 Reed Business Information, Inc.

Book Description Perfection Learning Corporation. Paperback. Condition: Good. A copy that has been read, but remains in clean condition. All pages are intact, and the cover is intact. The spine may show signs of wear. Pages can include limited notes and highlighting, and the copy can include previous owner inscriptions. At ThriftBooks, our motto is: Read More, Spend Less. Seller Inventory # G0606025529I3N00