Items related to The Economics of Innocent Fraud: Truth for Our Time

Galbraith, John Kenneth The Economics of Innocent Fraud: Truth for Our Time

The Economics of Innocent Fraud: Truth for Our Time 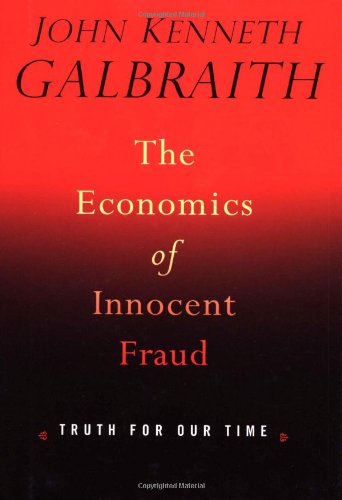 John Kenneth Galbraith has long been at the center of American economics, in key positions of responsibility during the New Deal, World War II, and since, guiding policy and debate. His trenchant new book distills this lifetime of experience in the public and private sectors; it is a scathing critique of matters as they stand today.
Sounding the alarm about the increasing gap between reality and "conventional wisdom" -- a phrase he coined -- Galbraith tells, along with much else, how we have reached a point where the private sector has unprecedented control over the public sector. We have given ourselves over to self-serving belief and "contrived nonsense" or, more simply, fraud. This has come at the expense of the economy, effective government, and the business world.
Particularly noted is the central power of the corporation and the shift in authority from shareholders and board members to management. In an intense exercise of fraud, the pretense of shareholder power is still maintained, even with the immediate participants. In fact, because of the scale and complexity of the modern corporation, decisive power must go to management. From management and its own inevitable self-interest, power extends deeply into government -- the so-called public sector. This is particularly and dangerously the case in such matters as military policy, the environment, and, needless to say, taxation. Nevertheless, there remains the firm reference to the public sector.
How can fraud be innocent? In his inimitable style, Galbraith offers the answer. His taut, wry, and severe comment is essential reading for everyone who cares about America's future. This book is especially relevant in an election year, but it deeply concerns the much longer future.

John Kenneth Galbraith has been immersed in economics for most of his long and remarkable life. The purpose of this extended essay is to illuminate examples of "innocent fraud" or the gulf between perception and reality in the modern American economic system--a system he had a hand in creating during his tenure in FDR's administration. Though tackling serious subjects, the book sparkles with wit and sly understatement. "A marked enjoyment can be found in identifying self-serving belief and contrived nonsense," he writes, clearly enjoying himself.

The dominant role of the corporation in modern society is one such form of innocent fraud, and he explains how managers hold the real power in our system, not consumers or shareholders as the image would suggest. Despite the "appearance of relevance for owners," capitalism has given way to corporate bureaucracy--"a bureaucracy in control of its task and its compensation. Rewards that verge on larceny."

He also explains how the public realm is effectively controlled by the private sector. The arms industry is but one example of this: "While the Pentagon is still billed as being of the public sector, few doubt the influence of corporate power in its decisions." He also looks at the financial world which "sustains a large, active, well-rewarded community based on compelled but seemingly sophisticated ignorance," and in particular the Federal Reserve System, "our most prestigious form of fraud, our most elegant escape from reality." In essence, Galbraith says that the Fed, for all of its power and prestige, effectively does nothing. And he has little problem with this: "Let their ineffective role be accepted and forgiven."

Both a guide to the present and an aid to shaping the future, this slim, satisfying book is a font of wisdom, conventional and otherwise, from a respected elder statesman in the twilight of his life. --Shawn Carkonen

John Kenneth Galbraith who was born in 1908, is the Paul M. Warburg Professor of Economics Emeritus at Harvard University and a past president of the American Academy of Arts and Letters. He is the distinguished author of thirty-one books spanning three decades, including The Affluent Society, The Good Society, and The Great Crash. He has been awarded honorary degrees from Harvard, Oxford, the University of Paris, and Moscow University, and in 1997 he was inducted into the Order of Canada and received the Robert F. Kennedy Book Award for Lifetime Achievement. In 2000, at a White House ceremony, he was given the Presidential Medal of Freedom. He lives in Cambridge, Massachusetts.

1. The Economics of Innocent Fraud: Truth for Our Time

2. The Economics of Innocent Fraud: Truth For Our Time

3. The Economics of Innocent Fraud: Truth for Our Time

4. The Economics of Innocent Fraud: Truth for Our Time

5. THE ECONOMICS OF INNOCENT FRAUD: