Items related to Reefer Madness: Sex, Drugs, and Cheap Labor in the... 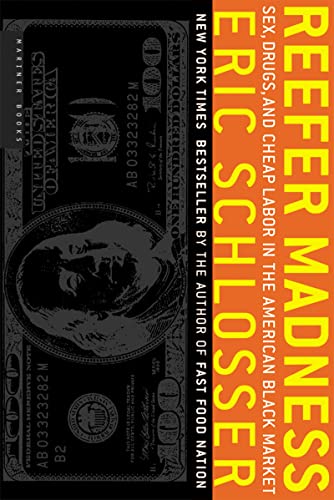 America’s black market is much larger than we realize, and it affects us all deeply, whether or not we smoke pot, rent a risqué video, or pay our kids’ nannies in cash. In Reefer Madness the best-selling author of Fast Food Nation turns his exacting eye on the underbelly of the American marketplace and its far-reaching influence on our society. Exposing three American mainstays — pot, porn, and illegal immigrants — Eric Schlosser shows how the black market has burgeoned over the past several decades. He also draws compelling parallels between underground and overground: how tycoons and gangsters rise and fall, how new techonology shapes a market, how government intervention can reinvigorate black markets as well as mainstream ones, and how big business learns — and profits — from the underground.
Reefer Madness is a powerful investigation that illuminates the shadow economy and the culture that casts that shadow.

As much as 10% of the American economy, and perhaps more, is comprised of illegal "underground" enterprises, according to author and Atlantic Monthly correspondent Eric Schlosser. And while this segment is never discussed in the newspaper business pages, Schlosser tackles it with the same in-depth analysis and compulsive readability that made his Fast Food Nation a best seller. Reefer Madness spotlights marijuana, migrant labor, and pornography, three of the most thriving black market industries, and analyzes the often-tenuous place each holds in society as a whole. While each of the three could be the subject of its own book, Schlosser keeps his scope narrow by concentrating on the lives of the participants in the underground economy, especially Mark Young, an Indiana man given a life sentence for participating in a marijuana sale, and Ohio porn magnate Reuben Sturman. At just 21 pages, the treatment of migrant laborers in the California strawberry fields is dealt with more briefly but is just as compelling thanks to the first-person narrative of Schlosser’s investigation. In telling these stories, which are both personal and universal, Schlosser deftly explores the manner in which his subjects are treated (and punished) compared to others in more above-ground ventures. Along the way, he asks hard questions as to what that treatment says about America. Schlosser writing is passionately opinionated, but this is no mere opinion piece: his perspective is amply supported by extensive research and clearly reasoned interpretation of data. His direct and forceful writing style makes the impact greater still. After reading Reefer Madness, readers are likely to be shocked, appalled, and flat-out bewildered by what’s happening in the cracks and crevices of American business. --John Moe

Eric Schlosser is a correspondent for the Atlantic. His work has also appeared in Rolling Stone, Vanity Fair, the Nation, and The New Yorker. He has received a National Magazine Award and a Sidney Hillman Foundation Award for reporting. In 1998 Schlosser wrote an investigative piece on the fast food industry for Rolling Stone. What began as a two-part article for the magazine turned into the New York Times bestseller Fast Food Nation: The Dark Side of the All-American Meal. His other books include Reefer Madness: Sex, Drugs, and Cheap Labor in the American Black Market and Chew on This: Everything You Don’t Want to Know About Fast Food, a children’s book he cowrote with Charles Wilson.