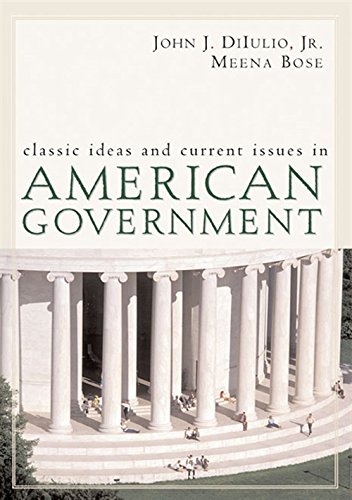 This reader offers succinct overviews of classic ideas and foundations of American government framed by contemporary issues and writings. Students are introduced to the classic debates, institutions, and individuals that shape American politics through key primary documents and shown how these issues remain at the core of policy making today. The included readings highlight questions about contemporary topics such as homeland security and affirmative action without losing touch with the timeless dilemmas of liberty, equality, and power.

John J. DiIulio, Jr. is a Professor of Political Science at the University of Pennsylvania and has won each of Penn's most prestigious teaching awards. He was previously Professor of Politics and Public Affairs at Princeton University. He received his PhD in Political Science from Harvard University. He has been a senior fellow and directed research programs at several leading think tanks including the Brookings Institution and has won awards from the Association of Public Policy Analysis and Management, the American Political Science Association, and other bodies. He has advised presidential candidates in both parties, served on bipartisan government reform commissions, and worked as a senior staff member in the White House.

Meena Bose is executive dean for public policy and public service programs in the Peter S. Kalikow School of Government, Public Policy and International Affairs at Hofstra University. She also is director of Hofstra's Peter S. Kalikow Center for the Study of the American Presidency. She received her Ph.D. in 1996 from Princeton University. Dr. Bose teaches courses on the American presidency, presidential leadership and policy making, and American politics. She is the author or editor of several volumes in presidency studies and American politics. She taught for six years at the United States Military Academy at West Point.