Items related to Why Politics Matters: An Introduction to Political... 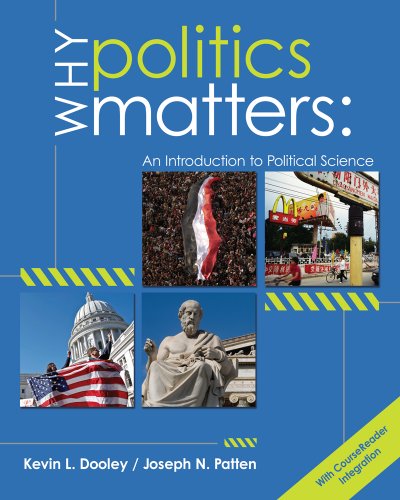 WHY POLITICS MATTERS: AN INTRODUCTION TO POLITICAL SCIENCE is a full-color, accessible introduction to Political Science. Organized evenly around the major divisions within Political Science: Theory, American Government, Comparative Politics, and International Relations, WHY POLITICS MATTERS follows a foundational approach to learning and gives students a "big picture" of the field. The authors approach the subject through a theme of theory and practice and emphasize why politics matters to the reader through current, global examples, encouraging critical thinking, discussion, and participation throughout the text. WHY POLITICS MATTERS is the first and only Introduction to Political Science book offering a fully integrated and customizable online reader, COURSEREADER, with a full slate of recommended primary source readings compiled by the authors. Each COURSEREADER selection is called-out in the text alongside the relevant discussion and is accompanied by critical thinking questions to help students apply the reading to their chapter lesson. You can further customize COURSEREADER for your class by choosing from the thousands of documents and videos within our Introduction to Political Science set and even adding your own notes and highlights before publishing your unique online reader for students to access.

Kevin L. Dooley is Dean of the Honors School and Associate Professor of Political Science at Monmouth University in West Long Branch, New Jersey. He received his Ph.D. from Rutgers University in 2004. Since joining the faculty at Monmouth University in 2003, Dr. Dooley has taught courses in Comparative Politics, Ethics in International Relations, American Foreign Policy, and Early and Modern Political Theory. His primary research interests include globalization, nationalism, and terrorism. He has published numerous articles and one book on the topic entitled POLITICS STILL MATTERS: GLOBALIZATION, GOVERNANCE, AND THE REVIVAL OF REGIONAL MINORITIES (2008). He lives in Brick, New Jersey with his wife Lauren, and their two children, Jack and Megan.

"The authors do a good job in making a host of complex topics user friendly for college students." "The first thing I enjoyed was the enthusiasm and passion the authors have towards their subject matter. As a passionate and enthusiastic person toward the discipline, I found their attempt to excite student interest a good thing."

"What really makes this book unique is that it centers around the most critical sub-fields of Political Science. The order of the chapters is compatible with the presentation of my lecture topics in my own Intro to Poli Sci class. The writing style and overall quality of work invested... is commendable. The authors are clear, succinct, and consistent in their presentation."

"The practical approach directly answers student concerns about relevance and clearly explains why politics (and theory) matters, and should matter, to everyone. The synthesis of theory and practice is directly applicable to younger citizens while still giving students a firm grasp of all aspects of politics."

"[The authors] should be proud and I look forward to seeing the eventual product. Their approach is unique and appreciated; the integration of theory and practice is most welcomed.... Breadth and depth are such that they greatly interest me for use in an introductory course geared towards likely majors and minors."

"This online reader is an excellent idea, it allows the professor to individually design the class around he/she considers most critical to the study. I would use these readings for class, this option would be a strong selling point for me."