Items related to Along for the Ride

Dessen, Sarah Along for the Ride 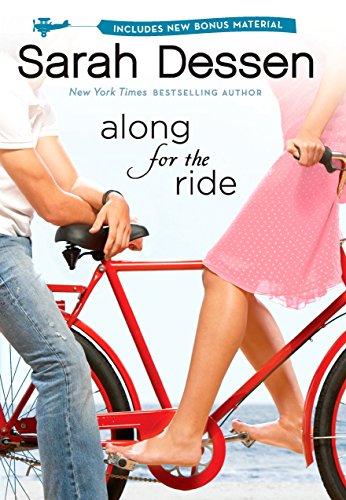 Nights have always been Auden’s time, her chance to escape everything that’s going on around her.

Then she meets Eli, a fellow insomniac, and he becomes her nocturnal tour guide.

Now, with an endless supply of summer nights between them, almost anything can happen. . . .

“As with all Dessen’s books, [this] is a must-have” —VOYA, starred review

Also by Sarah Dessen:
Dreamland
Just Listen
Keeping the Moon
Lock and Key
The Moon and More
Someone Like You
That Summer
This Lullaby
The Truth About Forever
What Happened to Goodbye

From the Author:
"I was born in 1970 in Illinois, but all the life I remember I’ve spent in Chapel Hill, NC. My parents were both professors at the University of North Carolina: my mom is a classicist (which means she knows everything you could ever imagine about myths, Latin, and words) and my dad teaches Shakespeare (which means I’d seen  As You Like It about five times by the age of 18.) I have one brother, who is a musician and lives in California with his son and his wife, an artist who designed my personal website. (Thanks, Mariangeles!)

"I’ve been writing, in one way or another, for as long as I can remember. I was always a big reader, mostly because my parents were. I used to get frustrated with my mom because she bought me books for Christmas when what I really wanted were the gifts my friends got, things like sweaters and jewelry. But I did love to read. When I was eight or nine my parents gave me an old manual typewriter and a little desk in the corner of our den, and I’d sit there and type up my stories. I was the kind of kid that people always sighed over and said, "She has such a wild imagination," which usually meant "I wish Sarah would try to stick to the truth." I have a tendency to embellish: I think it’s just a weakness of fiction writers. Once you learn how to make a story better, it’s hard not to do it all the time.

"In high school, I was lucky enough to have a big group of girlfriends that have really inspired a lot of the stories in my books. I’m still close with my friends from that time, so it’s never very hard to put myself back into that place, that voice. Also it doesn’t hurt to still be living in my hometown, where it’s a given that I’ll bump into people I had homeroom with, or guys I had big crushes on, while I’m pumping gas or buying stamps. It makes it hard to leave high school behind entirely, which is a good or bad thing depending on what day you ask me. I attended college at UNC, where I studied creative writing and graduated with a degree in English. (Which means I can quote small parts of many Great Works. Comes in handy occasionally, like at cocktail parties.) I’d been on the five-and-a-half year college plan, and when I graduated my parents were hoping I’d settle down and get a Real Job so they could stop worrying about me. But instead of doing the whole resume/pantyhose thing, I decided to stick to my job waiting tables at the world famous Flying Burrito Restaurant and try to publish a novel. At the time, I had only one very bad book I’d written my senior year of college and the beginnings of another one. Luckily, my family was supportive and I spent a few years living in a ramshackle little house where I wrote during the day and did the restaurant thing at night.

"Three years after graduating, I sold my first book,  That Summer, but it wasn’t until a year after that that I got offered a teaching job and left waitressing for good. I still miss it sometimes, though. It was a great job for a writer. Endless conversations to eavesdrop, tons of material, and fast money without ever taking work home. Plus, free Mexican food, the best perk of all. Now, I’ve published four books, all for young adults. I never really intended to be YA writer, but the second book I showed my agent she thought had a strong teenage voice, so she sent it off to an editor at Orchard Books, who bought it. Even though it was in a way accidental, I’ve found that writing for teens suits me. I do short stories, and other novels, that are for an older audience, but again and again I am brought back to the stories of high school. Maybe it’s because so much happened to me then that I’m not finished yet telling everything. My senior quote was from Pink Floyd (okay, I was a bit of a burnout---I spent a lot of time in the parking lot, whatever, let’s move on) and it pretty much summed up my future, although I didn’t know it at the time. It was: "The time is gone, the song is over, thought I’d something more to say." It turns out that I did.

"The books I read when I was teenager, the good ones anyway, have stuck more in my mind than anything since. I still love books, but while I couldn’t tell you complete plots of novels I read even six months ago, I do remember even the smallest descriptive details from Lois Lowry’s  A Summer to Die or Judy Blume’s  Are You There God? It’s Me, Margaret. I think it was because back then books were still somewhat new to me, and when I found an author who seemed to say just what I was feeling, it really struck me and resonated. I hope that my books do that for the people who read them: I think it’s the best thing to which any writer can aspire. Now, I teach writing at UNC-Chapel Hill, where I’m lucky enough to see my students find their own voice, the way I did in the same program there not so long ago. Teaching is great for me, because I get to show people how writing can really change the way you see not only yourself but the world. I’ve found in my own life that if my writing isn’t going well, not much else will. It is the one constant, the key to everything else.

"As far as my other life, my non-writing life, I live in the country with my husband, some lizards, and two dogs who are completely spoiled and rule me completely. I like to work in my garden---although I have not yet perfected the art of keeping everything alive----and, in my weaker moments, shop. I have a bit of an addiction to the Gap clearance rack, to be honest. I have this strange need to buy huge quantities of black pants. How many pairs of black pants does one person need? (Obviously for me, the answer is 11 and counting. But I digress.) What else can I tell you? I love Starbucks mochas but they make me way hyper. I subscribe to too many magazines. I make a mean bean salad. I could go on, but the truth is, my books are much more exciting than I am, and that’s a good thing. It’s always more fun to make stuff up anyway."
About the Author:
Sarah Dessen is the author of thirteen novels, which include the New York Times bestsellers The Moon and More, What Happened to Goodbye, Along for the Ride, Lock and Key, Just Listen, The Truth About Forever, and This Lullaby. Her first two books, That Summer and Someone Like You, were made into the movie How to Deal.

Dessen’s books are frequently chosen for the Teens’ Top Ten list and the list of Best Fiction for Young Adults. They have been translated into twenty-five languages. Sarah Dessen is the recipient of the 2017 Margaret A. Edwards Award from the Young Adult division of the American Library Association.